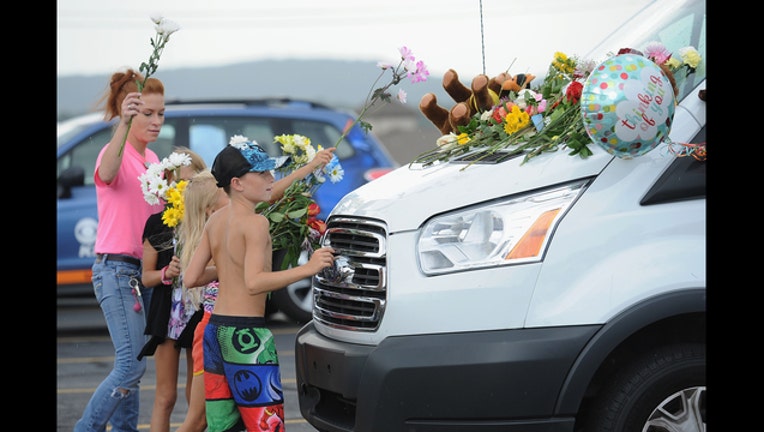 BRANSON, MO - JULY 20: A family places flowers on vehicles of the victims of the Ride The Ducks accident on July 20, 2018 in Branson, Missouri. Hundreds of mourners stopped by the location to pay their respects to the victims after a duck boat capsiz

KANSAS CITY, MO - The owners and operators of a tourist boat that sank this month in Missouri, killing 17 people, put profits over people's safety when they decided to put the Ride the Ducks boat on a lake despite design problems and warnings of severe weather, a lawsuit alleges.

The lawsuit filed Sunday in U.S. District Court in Kansas City seeks $100 million in damages on behalf of two of nine members of an Indiana family who died when the tourist boat sank July 19 at Table Rock Lake near Branson. Others killed were from Arkansas, Illinois and Missouri.

"This tragedy was the predictable and predicted result of decades of unacceptable, greed-driven, and willful ignorance of safety by the Duck Boat industry in the face of specific and repeated warnings that their Duck Boats are death traps for passengers and pose grave danger to the public on water and on land," the lawsuit alleges.

Ripley Entertainment Inc., Ride the Ducks International, Ride the Ducks of Branson, the Herschend Family Entertainment Corp., and Amphibious Vehicle Manufacturing are named in the lawsuit, which was filed by a team led by a Philadelphia-based legal firm that has litigated previous lawsuits involving duck boats. The legal team planned a news conference Monday morning.

A Ripley spokeswoman said in a statement Monday that the company remains "deeply saddened" by the accident and supportive of the affected families. She said the company would not comment further because a National Transportation Safety Board is still underway and no conclusions have been reached.

The lawsuit says the boat operators violated the company's own policies by putting the boat into the water despite the weather warnings. It also says the captain violated protocol by not telling passengers to put on life jackets when the water got rough and instead lowering plastic side curtains, "thus further entrapping passengers in the soon-to-sink vessel."

The lawsuit cites an August 2017 report from private inspector Steve Paul , who looked at two dozen of the duck boats. The report warned Ripley Entertainment that the vessels' engines - and pumps that remove water from their hulls - were susceptible to failing in bad weather. It also accuses the defendants of ignoring warnings the NTSB issued in 2000 that the vehicles, which are designed to operate on land and water, should be upgraded to ensure the boats remain upright and floating in bad weather.

When Robert McDowell, then-president of Ride the Ducks Branson, responded that upgrades would require significant costs, NTSB Chairman Jim Hall said the recommendations were made because the agency believed "immediate action was necessary to avoid additional loss of life." The lawsuit says the defendants ignored the warnings.

It also alleges McDowell designed and developed the stretch duck boats, including the Stretch Duck O7 that sank, despite having no engineering training.

The National Weather Service issued a severe thunderstorm warning for the area including Table Rock Lake about 30 minutes before the boat went onto the lake with 31 people on board.

The NTSB said Friday that a preliminary review of video and audio recordings from the boat showed that the lake changed from calm to dangerous in a matter of minutes. The agency emphasized it had not drawn any conclusions on what caused the boat to sink.

The lawsuit was filed on behalf of the estates of Ervin Coleman, 76, and Maxwell Ly, 2. Maxwell was identified by authorities as Maxwell Coleman after the boat sank.