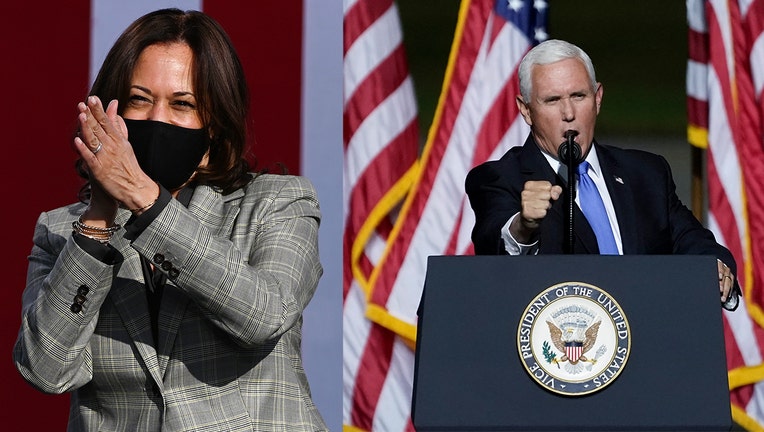 Kamal Harris photographed side by side with Vice President Mike Pence.

LOS ANGELES - FOX Bet Super 6 is back to give viewers of Wednesday’s vice presidential debate a way to participate in the conversation and bring home a share of the $25,000 jackpot.

Vice President Mike Pence and Sen. Kamala Harris are still set to take the debate stage at the University of Utah in Salt Lake City, despite President Donald Trump’s recent coronavirus diagnosis. The debate is scheduled to take place from 9-10:30 p.m. ET on October 7.

FOX Bet Super 6 players will have the chance to win by submitting their answers to six questions centered around possible outcomes of the debate. If you think you can guess what both candidates will say first, which college or university will be mentioned by its first name and who will be the last to say the word “vote,” this could be the game for you.

To play, just download the app! The FOX Bet Super 6 app is free and available now in the iOS App store and Google Play store.  Entries must be received before the Wednesday night debate begins.

Changes have already been made to provide further social distance between the candidates at the debate in light of Trump’s diagnosis last week. Pence, 61, and Harris, 55, will now stand 12 feet apart on Wednesday night, instead of the originally-planned 7 feet.

The first FOX Bet Super 6 Presidential Debate contest drew nearly 480,000 entries—757 of them perfect— for a piece of the $25,000 prize. Texas had the most players with perfect scores with 14% of the contest’s winners. Residents from Florida and California came in a close second and third place with 8% share each.

FOX Bet Super 6 has already given away more than $1.4 million since it first launched in September 2019, primarily to winners who made correct predictions of its weekly NFL contest. The app is currently the top free-to-play sports game prediction app in the country.

FOX Bet Super 6 is available nationwide with the exception of Washington state.

FOX Bet is an online and mobile sportsbook originally developed through a first-of-its-kind national media and sports wagering partnership in the United States between The Stars Group Inc. and FOX Sports, a unit of Fox Corporation. FOX Corporation is the parent company of FOX Television Stations. On May 5, 2020, Flutter Entertainment Plc announced its acquisition of and subsequent merger with The Stars Group.