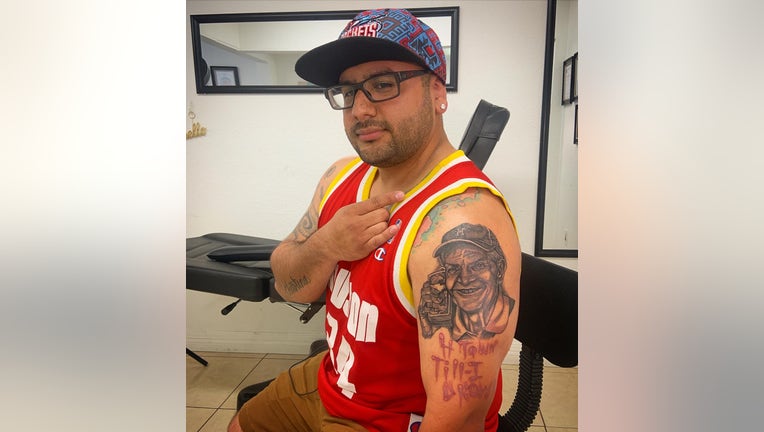 Machorro got his Mattress Mack tattoo on Friday at Kiss Permanent Makeup in Pasadena.  According to the Houston native, he’s working on a tattoo arm sleeve dedicated to Houston and he started with Mattress Mack.  He, and tattoo artist Jose Cortez, drew up the idea.

"If I go out of town and people ask, who’s that?  [I’ll respond] Mattress Mack.  Google him," said Machorro.  "No regrets at all.  None whatsoever."

"Everybody gets dragons, a Jesus Christ tattoo, the Virgin Mary, but who gets a Mattress Mack tattoo?" asked Cortez.  "No one."

Houston man gets "Mattress Mack" tattooed to his upper arm

A Houston man got a Mattress Mack tattoo on Friday at Kiss Permanent Makeup in Pasadena.  According to the Houston native, he’s working on a tattoo arm sleeve dedicated to Houston and he started with Mattress Mack.

The tattoo is an image of McIngvale wearing a Houston Astros hat, a grill over his teeth, a ring on his finger, and holding a stack of money.  McIngvale, owner of Gallery Furniture, is known for years of community service and giving to the city of Houston.

"I call him the Texas hero, or the king of Houston, because he his is," said Machorro.  "He does so much for the community.  I just want to show my respect."

Neither Machorro or Cortez had ever met Mattress Mack.  On Saturday, we brought the two to meet the man they tattooed on Franky’s arm.

"I love it Franky," said Mack as he looked at the tattoo of himself.  "I appreciate it.  A lifelong commitment to Mattress Mack."

Although Mack admits, he doesn’t have any tattoos, he said he appreciates Machorro’s new ink.

If you’re interested, the Mattress Mack tattoo took Cortez about 8 hours to complete at Kiss Permanent Makeup.  He says the price was around $1,000.