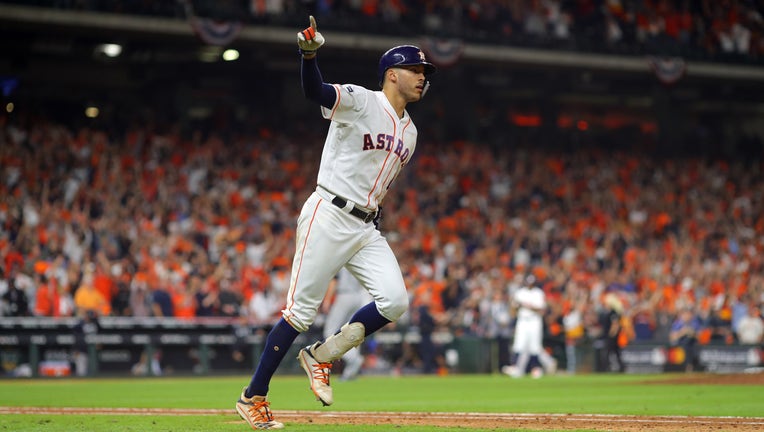 HOUSTON, TX - OCTOBER 13: Carlos Correa #1 of the Houston Astros rounds the bases after hitting a walk off home run in the 11th inning to beat the New York Yankees in Game 2 of the ALCS at Minute Maid Park on Sunday, October 13, 2019 in Houston, Texa ( (Photo by Alex Trautwig/MLB Photos via Getty Images) )

HOUSTON - Carlos Correa’s walk-off home run in the 11th inning Sunday night carried the Houston Astros over the New York Yankees for a win, but it also carried a very special meaning for a young fan battling cancer.

Carlos Correa promised Jalen that he would point at him when he scored a home run in his honor, and he came through on his promise.

On Friday, Correa and his fiancée Daniella Rodriguez visited patients at MD Anderson Cancer Center. Rodriguez said one of the patients, Jalen, is from Laredo and attends her old high school. She shared a photo on Instagram of her and Correa meeting Jalen.

She wrote, “Nothing else in this world is as rewarding as this. Carlos and I got to meet this special guy today🙏🏼 Jalen is a fellow Laredoian like myself AND attends my old high school 🤟🏼As soon as I heard about Jalen being in Houston I made sure we did everything possible to meet him 🙏🏼 You are our hero Jalen! Keep fighting we’re right behind you cheering you on🧡 thank you @mdandersoncancercenter for letting us visit some of your patients🙏🏼 #LonghornPride”

On Sunday, before Game 2 of the American League Championship Series, Rodriguez shared an image of a quote from Carlos Correa to Jalen saying, “NEXT HOME RUN I HIT WILL BE FOR YOU… WHEN YOU SEE ME POINTING, I’LL BE POINTING AT YOU.”

The Astros and the Yankees were tied 2-2 until the 11th inning when Correa hit the walk-off home run. He ran around the bases while pointing toward the crowd.

The series is now tied, 1-1. Game 3 will be Tuesday at Yankee stadium.