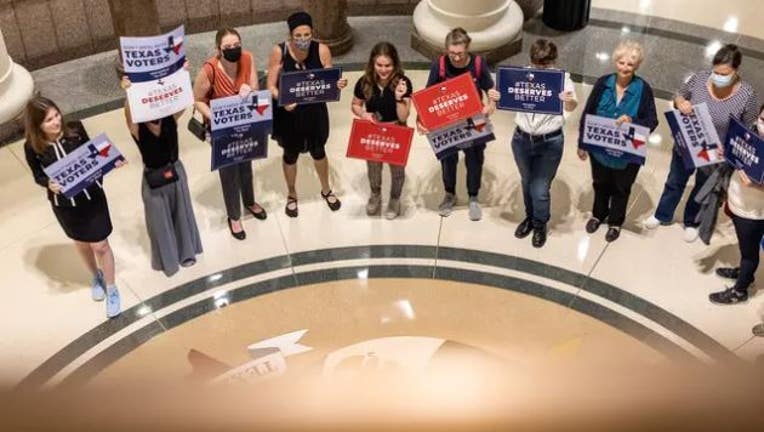 Activists gather outside a Senate committee hearing on proposed election reforms at the Capitol on Saturday, July 10, 2021. Credit: Jordan Vonderhaar for the Texas Tribune

AUSTIN, Texas - The second round of the Texas voting bill fight kicked off with haste this weekend as Republicans worked to rapidly push through new restrictions in overnight hearings.

Just a few days into a 30-day special legislative session, a Texas House committee voted early Sunday morning to advance a revived GOP-backed bill that would bring back many of the proposals that failed to pass in the spring. A panel of Senate lawmakers followed suit later in the day following a lengthy public hearing on its version of the legislation that played out Saturday afternoon into the night.

The votes from the Republican-majority committees will put the bills on a path to be voted on by the full chamber this week.

The legislation filed in each chamber is similar to the GOP priority voting bill from the regular legislative session that prompted Democrats to walk out and break quorum in late May. That action effectively killed the bill, prompting Gov. Greg Abbott to call the special session that began Thursday. In Senate Bill 1 and House Bill 3, Republicans have already dulled some of the edges of the legislation, dropping controversial provisions to restrict Sunday voting hours and to make it easier for judges to overturn elections.

Nearly 300 people signed up to testify on the legislation in hearings that began Saturday but stretched into the early Sunday morning hours, but many went home before they were called up to speak before lawmakers. In the House, the vast majority of Texans who registered a position on the bill — 407 of 484 members of the public —were in opposition, according to the committee's registration figures.

A repeat of the regular legislative session, many of the arguments were familiar in the marathon hearings. Democrats, civil rights groups and voting rights advocates echoed each another in their concerns that the legislation would harm access to voting, particularly for marginalized voters, while Republicans pitched their voting bills as part of an effort to bolster the security of Texas elections.

"We're going to make it harder for communities of color, for individuals with disabilities, for individuals where English isn't their primary language, and for seniors to vote and to have access to the ballot box, even though the elections were a resounding success," state Rep. John Bucy, D-Austin. "When I think about legislation I'm going to file, [I consider] what problem in this state do I want to solve, so I'm trying to figure out what problem is this bill trying to solve."

State Sen. Bryan Hughes, the Mineola Republican authoring the Senate legislation, lamented that debate over the bill had become "bitterly partisan," but Republicans' framing of the legislation has largely aligned with the GOP’s nationwide response to former President Donald Trump’s false claims of widespread voting irregularities. Texas Republicans have been steadfast in pushing what they deem as "election integrity" measures even though there is no evidence of widespread voter fraud and state officials described the 2020 election as "smooth and secure."

But the proposals have been met with concerns from civil rights organizations and voting rights advocates who have argued that efforts geared toward improving security would instead raise new barriers. Significant portions of both bills focus on shutting down local expansion of voting options meant to make it easier to vote, like the drive-thru voting and overnight early voting hours used by Harris County in the 2020 general election. Local officials have said both initiatives proved particularly successful in reaching voters of color.

Upon questioning by Democrats, Keith Ingram — the top elections official for the Texas Secretary of State — told lawmakers he was not aware of evidence of fraud tied to voting that occurred overnight or as part of Harris County’s drive-thru efforts.

On Saturday, state Sen. Royce West, D-Dallas, questioned why the Legislature would prohibit options to increase voter access altogether instead of working to address the concerns Republicans may have about how they were implemented.

"Surely, we should be able to find ways to resolve those issues, especially if it’s a convenient model for people to be able to vote," West said. "When we stand up and say, ‘We can’t fix it but we don’t even want to look at trying to fix it,’ I think it’s inconsistent with the intent of the bill."

Hughes defended the ban by arguing it would not limit voter access because the state offers a long early voting period and that requiring voters to go into polling places to cast their ballots in person was "not a radical concept."

In the House's hearing, state Rep. Andrew Murr faced hours of questions from Democrats who zeroed in on his intent for pushing the legislation and attempted to interrogate whether they had considered the possible fallout for voters of color. The Junction Republican defended the legislation as an effort to "reduce the likelihood of fraud" and standardize elections, pushing back on what he described as "ad hoc" interpretations of the election code by Harris County through initiatives like overnight voting.

"One of the important goals here is to establish and reemphasize uniformity," Murr said. "I'm not saying the ballots that were cast were not successfully done. It's just that you had one jurisdiction over here doing it and then other parts of the state that weren't."

The day of 24-hour voting offered by Harris County was meant to expand access to voters like shift workers for whom traditional hours might not work.

Democrats repeatedly asked whether Murr had conducted a disparate impact study to assess if the new voting rules would disproportionately affect voters of color. He indicated he had not. Like in the regular legislative session, they were backed in their opposition by groups that have a long history of fighting bills that could harm Black and Hispanic voters, like the Mexican American Legal Defense and Educational Fund and the Texas NAACP.

Portions of the debate also centered on provisions in the bill that would create new rules — and potential penalties — for people who assist people in casting their votes, including those who help voters with disabilities. Both Democrats and disability rights advocates expressed concerns about a potential chilling effect on those assistants that could further complicate the process for disabled voters.

Debate over the election bills comes as Republicans at the Legislature push a number of other issues on Abbott’s special session agenda — an 11-item priority list that appeals largely to conservative voters and includes legislation that did not pass when the Legislature convened earlier this year.

Democrats so far haven’t ruled out another quorum break to again block the election bill, with party members in both chambers saying all options remain on the table. Though House Republicans have changed some of their approach for the special session in an apparent effort to appease opponents, Democrats say the legislation is still flawed and insist they plan to fight the bill at every opportunity.

Senate Democrats have echoed those sentiments, though a number of them have rallied around a counter proposal filed by West. The legislation would allow for online and same-day voter registration and expand the early voting period, among other provisions.

West acknowledged during a Friday news conference that while the legislation likely won’t receive a hearing in the GOP-dominated Senate, he hopes Democrats and Republicans can "strike compromises to make certain that all people in the state of Texas are able to vote."

Disclosure: The Texas Secretary of State's Office has been a financial supporter of The Texas Tribune, a nonprofit, nonpartisan news organization that is funded in part by donations from members, foundations and corporate sponsors. Financial supporters play no role in the Tribune's journalism. Find a complete list of them here.