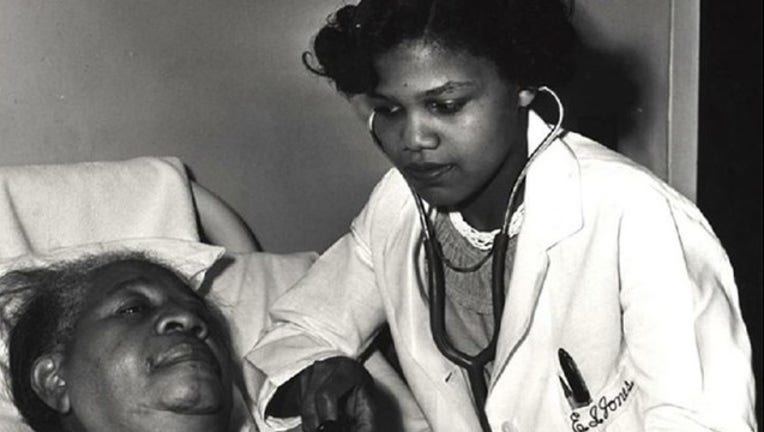 HOUSTON (FOX 26) - The first black person to attend and graduate from the University of Arkansas Medical School, and the first black woman to intern at a Baylor College of Medicine-affiliated hospital has died in Houston. She was 91.

Dr. Edith Irby Jones' family told FOX 26 her love for medicine stemmed from losing her 12-year-old sister at the age of eight to typhoid fever, and suffering from rheumatic fever herself as a child. She graduated from Knoxville College, and in 1948, she became the first black person to be accepted into UAMS.

According to the Encyclopedia of Arkansas, although Dr. Jones had been accepted into UAMS, she still endured segregation, having to use different dining, lodging and bathroom facilities. Defying the rules at that time, some of her classmates chose to eat and study with her anyway.

During her second year of medical school, she married Dr. James B. Jones. The couple had three children.

She moved to Houston seven years later and became the first African-American woman intern at Baylor College of Medicine Affiliated Hospital. She later completed her last three months of residency at Freedman's Hospital in Washington, D.C.

The Encyclopedia of Arkansas says she was among several black physicians who founded Mercy Hospital, and one of 12 doctors who owned and developed Park Plaza Hospital.

Over time, the Houston Hospital was renamed the Edith Irby Jones M.D. Health Care Center in her honor.

In addition, she was a civil rights activist that worked with people like Dr. Martin Luther King, Jr. and was a member of the "Freedom Four," who traveled to homes and churches located in the south in an effort to get people to join the civil rights movement.

Although Dr. Jones has received several accolades for her impact around the country and in the community, two of her biggest roles were being a mother and grandmother.

"She was one of my best friends," says Johari Williams, Jones' granddaughter. "You could tell her any and everything, and she didn't judge and always loved you in spite of what you told her. She meant a lot to the world, but meant even more to us."

Mayor Sylvester Turner issued the following statement on her passing:

"Dr. Edith Irby Jones was a trailblazer. She was the first black person to attend and graduate from the University of Arkansas Medical School and the first black woman intern at a Baylor College of Medicine affiliated hospital. Despite receiving numerous accolades throughout her life, Dr. Jones practiced medicine with humility. She was gracious, warm, and personable with a knack for making each of her patients feel special. She also treated everyone with respect. She insisted on educating the broader community about the importance of maintaining their health and living their best lives. Houston will remember Dr. Jones as a pioneer and an icon. Her legacy will endure through the many contributions in her medical practice and in the generations of Houstonians whose lives she touched."