Alexandra "Lexi" Harris was killed when she was struck by a vehicle while helping others involved in a crash on I-5.

SEATTLE - Officer Alexandra Harris died as she lived – in service to others.

The 38-year-old Seattle Police Department patrol officer was on her way home from shift early Sunday morning when she stopped to help with a multi-car crash on Interstate 5. She was struck and killed by another motorist.

While Harris, a five-year veteran of SPD, was off-duty at the time, Q13 is told that her death will likely be classified as "line of duty" due to the circumstances.

"It’s no surprise to hear that Lexi selflessly put the safety of others before her own, but it is tragic and heartbreaking to know that she lost her life doing just that," said Aly Mustain, a former SPD officer who left the agency last year. 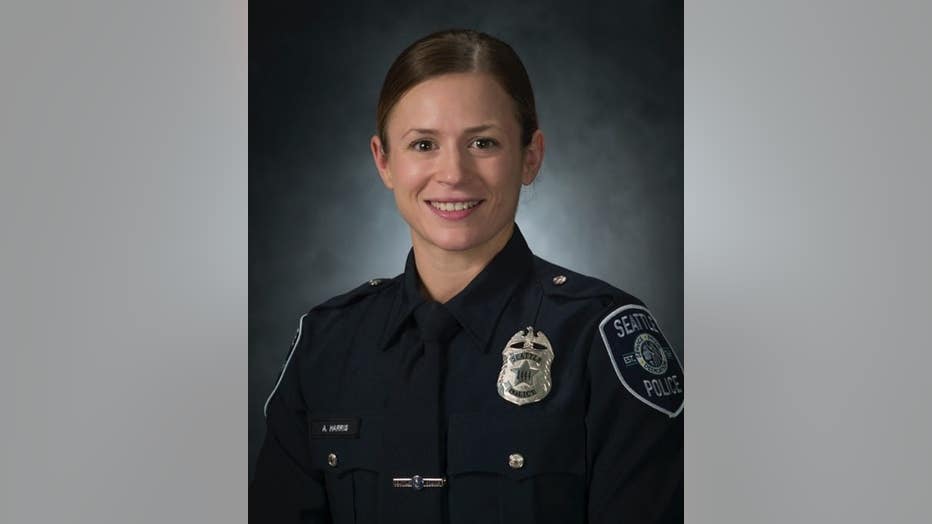 Mustain said she looked up to Harris, who she called a "real life Wonder Woman."

"Lexi exemplified what it meant to be a well-respected, driven, self-motivated, hard-working, squared away human being. I was truly in awe of her motivation, dedication and ability to excel at damn near everything she did. As one of the very few female cops that I looked up to and aspired to be like, she naturally outperformed many of her male counterparts and was exactly who you’d want by your side and as your backup."

Harris, who received a department award in 2017 for her work helping people in crisis, was also passionate about helping her fellow officers.

According to The Seattle Times, Harris was involved in the department’s wellness unit and helped start a podcast that focused on bridging the divide between police and the communities they serve.

A current SPD officer who worked with Harris said she was passionate about helping officers with PTSD.

"She really took pride in her job and the profession. A true cop's cop," he said.

Another officer, who left SPD last fall, shared a memory of Harris from a period of turmoil in 2020.

"When my precinct became CHOP and we were moved to another precinct where Lexi worked, she made a sign in the women’s locker room saying ‘welcome East precinct ladies. If there is anything we can do to help, please let us know.’ This small gesture during the extremely difficult time we were all going through was heart felt and shows how caring she truly was," the former SPD officer wrote. "Her words were genuine and she always checked in on us."

The former officer also recalled how Harris was a defensive tactics instructor - whose skills could match someone twice her size.

"One of my fondest memories is when Lexi would demonstrate a particular technique. Lexi, being tiny but mighty, would throw a big 200 pound plus muscle man around like a rag doll, showing technique goes further than brawn."

"Our heart goes out today to the family and friends of the officer tragically killed while trying to help others following a collision," Seattle Mayor Jenny Durkan wrote in a tweet Sunday. "The officer’s service to our community went beyond their shift and we can never repay this officer for putting the life of others ahead of their own."

Washington State Patrol Captain Ron Mead got emotional Sunday after a reporter asked during a press briefing why the officer’s death was affecting him "to the degree that it is."

Captain Mead said Officer Harris could have easily driven past the crash, but did not.