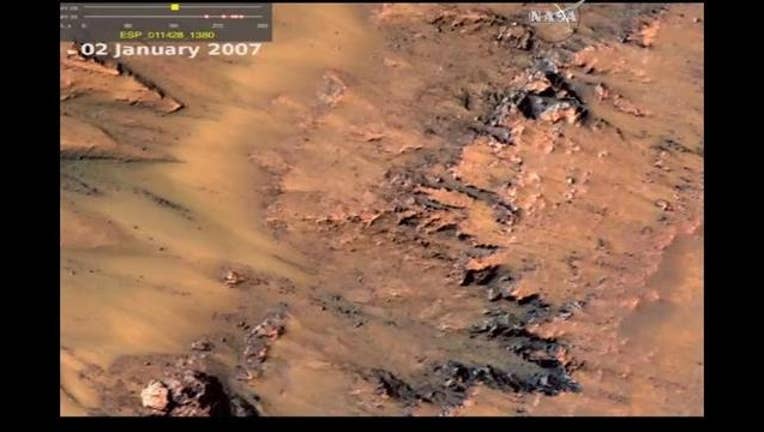 CAPE CANAVERAL, Fla. (AP) — Mars appears to have flowing streams of salty water, at least in the summer, scientists reported Monday in a finding that could have major implications for the possibility of life on the planet.

Scientists in 2008 confirmed the existence of frozen water on Mars. But the latest observations from an instrument aboard NASA's Mars Reconnaissance Orbiter strongly support the longtime theory that salt water in liquid form flows down certain Martian slopes each summer, according to the researchers.

"Mars just got more interesting," NASA said via Twitter before holding a news conference at its Washington headquarters. The space agency called the results "a major science finding."

Because water is essential to life, the findings could boost the notion of life on Mars. The researchers said in the journal Nature Geoscience that further exploration is warranted to determine whether any microscopic life exists on the planet.

The evidence of flowing streams consists of dark, narrow streaks on the surface that tend to appear and grow during the warmest Martian months and fade the rest of the year.

Mars is extremely cold even in summer, and the streaks are in places where the temperature has climbed above minus-10 degrees Fahrenheit. But salt can lower the freezing point of water and melt ice.

The source of the water is still a mystery. Scientists noted it could be melting ice, an underground aquifer, water vapor from the thin Martian atmosphere, or some combination.

The Mars Reconnaissance Orbiter which has been circling the red planet since 2006.

The lead author of the research paper, Lujendra Ojha, is from Georgia Institute of Technology.