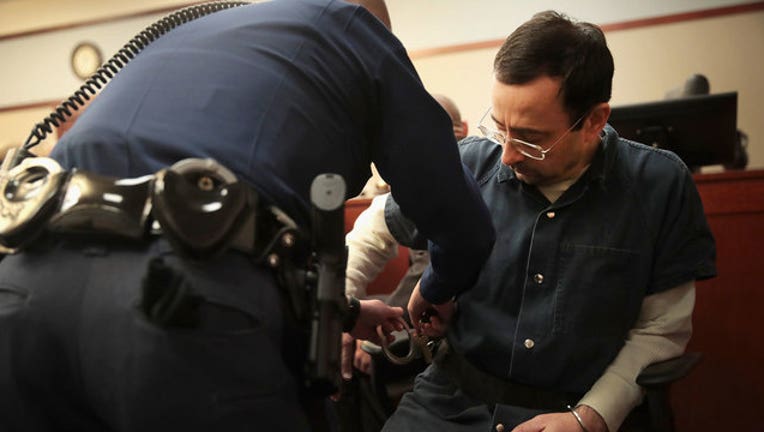 LANSING, Mich. (WJBK) - The Michigan doctor who sexually abused Olympic gymnasts and other young female athletes instead of solving their sports injuries is expected to learn his sentence Wednesday.

Judge Rosemarie Aquilina will hear from a few more victims and then send Larry Nassar to prison. You can watch a livestream from the courtroom when the hearing continues live on our Facebook page here.

This is the seventh day of the hearing that has given the girls, young women and their parents a chance to confront Nassar in court. He faces a minimum prison term of 25 to 40 years but it could go higher.

He pleaded guilty to assaulting seven people in the Lansing area, including Rachael Denhollander, one of the last people expected to speak Wednesday. The sentencing hearing has been open to anyone who said they were a victim. More than 150 survivors have come forward to speak.

His accusers said he would use his ungloved hands to penetrate them, often without explanation, while they were on a table seeking help for various injuries. Many stated they were children at the time this happened, and were in denial about what was happening or were afraid to speak up. Many have also said this happened while a parent was in the room, and that Nassar would use a sheet or his body to block the parent's view.

The judge is likely to be unsparing in her treatment of Nassar. Aquilina has praised the victims who have appeared in her court since Jan. 16, calling them "sister survivors," while also assuring them that their perpetrator will pay. The women have included Olympians Aly Raisman, Jordyn Wieber and McKayla Maroney.

Aly Raisman gets fierce with Nassar, USOC, and USA Gymnastics

On Tuesday, the NCAA reportedly launched an investigation of Michigan State University and the school's handling of the case. The school's board of trustees has also asked the attorney general to investigate their response.

MSU President Lou Anna Simon has faced a firestorm of criticism calling for her to step down. Simon has contended that she was lied to by Nassar, like so many others at the school were over the years. Yet, in 2014 the university's suspension and investigation of allegations against Nassar turned up empty.

Nassar has already been sentenced to 60 years in federal prison for child pornography crimes. He is scheduled to be sentenced next week on more assault convictions in Eaton County, Michigan.