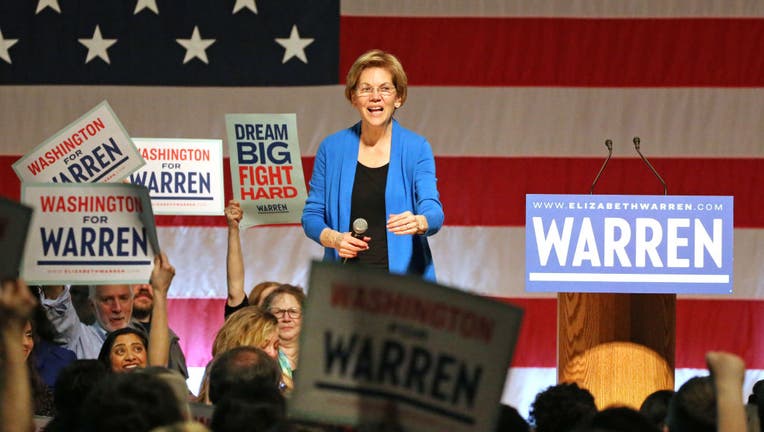 Her public event took place at the Seattle Center Armory near the Space Needle, the same day as the Nevada caucuses where Vermont Sen. Bernie Sanders scored a resounding victory and Warren was finishing a distant fourth.

The Massachusetts senator congratulated Sanders on winning and thanked Nevada for keeping her in the fight. She said her campaign has raised $9 million since the candidate debate Wednesday night.

"We have a lot of states to go, and right now I can feel the momentum," she said.

She turned immediately from Nevada to attacking Mike Bloomberg, calling the former New York mayor not a tall threat but a big one with his billions of dollars.

The Seattle Center Armory holds about 2,500 people. It filled quickly with hundreds of other supporters packing an overflow area. She addressed that crowd first, telling them they could watch her on a large-screen TV and that she would return to take selfies with everyone who wanted one.

Theodore Samuels, 23, of Seattle said he supports Warren because he thinks she has outlined her policies more than some others have and because she believes in rights for transgender people. The University of Washington law school student, who identifies as a transgender person, said he doesn’t want the Democratic candidate to be a white man but he’ll vote for one should one become the Democratic nominee.

“It’s important that we send the message that people who don’t fall into those categories should have a seat and head the table," he said.

Last year, Washington Gov. Jay Inslee signed a measure changing the state’s presidential primary from May to the second Tuesday in March. The move aims to involve more voters and make Washington more relevant during the national delegate chase. And while Republicans had previously used the primary to allocate delegates, this is the first year in which both parties will use the results of the primary instead of the caucuses.

The state Democratic Party’s central committee voted last year to start using a hybrid system that utilizes the state’s vote-by-mail system for a presidential primary to apportion delegates to candidates, and caucuses and conventions to select which delegates will represent the state at the national convention in Milwaukee.

About 230,000 Washington Democrats turned out to caucus across the state in March 2016, while 1.4 million cast a ballot in the May presidential primary. Sanders handily won the caucuses. But Hillary Clinton, who went on to become the Democratic nominee, won the non-binding Democratic primary in Washington that year.

With the change by the state party, a much broader Democratic electorate will be involved this year in deciding the winner of the state. Washington state has no party registration. But since 2008, the presidential primary requires voters to attest to being either Republican or Democrat.

Warren was scheduled to travel to Denver after the Seattle event.