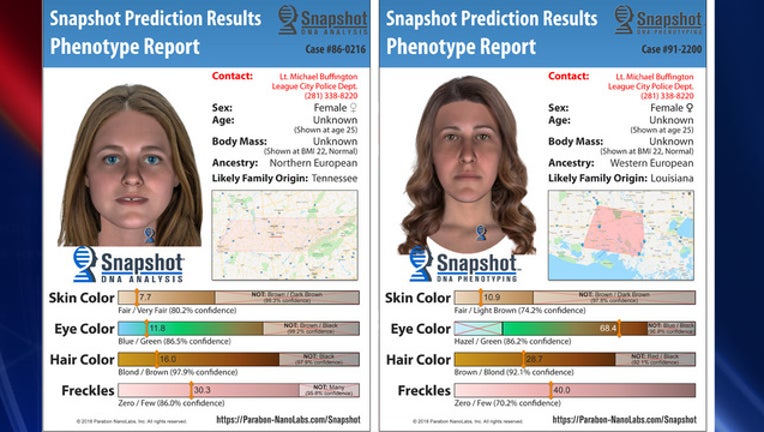 Through forensic DNA analysis conducted by Parabon NanoLabs, new predictions have been made about the women's characteristics that could help someone identify them.

The predictions were used, along with a forensic facial reconstruction, to create composite sketches of the woman at the age of 25. Because the composites are based off of DNA, environmental factors like scars and hair style cannot be determined.

Anyone with information in the cases are asked to call Lieutenant Michael Buffington of the League City Police Department at (281) 338-8220.

Investigators are asking for the public's help identifying the remains of a homicide victim found on February 2, 1986, in League City.

The analysis predicted the woman likely had fair to very fair skin, blue or green eyes, blond/brown hair, no or few freckles. It is believed the woman's relatives originate from Tennessee.

Coroners estimate the woman was 22-30 years old and 5'5" to 5'8" tall. They believe she died six weeks to six months before she was found.

Investigators say the woman had a small caliber gunshot wound to the back. She also had old, healed injuries which are not believe to be related to her death. Her left fifth and fourth ribs showed healed fractures that were likely the result of a singular event, investigators say. She had a noticeable gap in her front teeth.

Investigators are asking for the public's help identifying the remains of a homicide victim found on September 8, 1991, in League City.

The analysis predicted the woman likely had fair skin, hazel eyes, brown hair, no or few freckles, and has a likely family origin of Louisiana.

Coroners estimate the woman was 24-34 years old, 5'0" to 5'3" tall, and weighed 100-130 lbs. They believe she died six weeks to several months prior to being found. Investigators say the woman had several healed injuries, including compression injuries to her spine, which were not related to her death. Due to her injuries, investigators believe the woman may have had apparent problems with her head or spinal movements.

Based off of additional analysis using genetic genealogy methodologies, it is believed the woman's relatives were of Louisiana Acadian descent. Locations where the victim’s extended family may have originated: Broussard, Lafayette Parish, New Iberia, Abbeville, Breaux Bridge, and St. Martin Parish areas are of special interest, followed by Vermillion Parish, St. Landry Parish, and Assumption Parish.