The Dallas Police Department has four new police K9s thanks to a non-profit group that works to build stronger relations between police and the public.

DALLAS - The Dallas Police Department has four new police K9s thanks to a non-profit group that works to build stronger relations between police and the public.

The department said the dogs will play an important role in keeping neighborhoods safer.

The dogs and their handlers form very strong bonds by not only working together, but also living together.

DPD leaders said they are a critical part of the force because, with their amazing senses, they are able to do things humans simply can't.

Bear, Goro, Figor, and Max are the newest members of Dallas PD.

He introduced FOX 4 to Bear, who has already made Dallas a safer place.

"He's already been able to locate several grams of cocaine," he said. "One seizure, over $2,000 in cash, crack, PCP. He’s working really well."

Sgt. Wolverton is thankful for the donation from One Community USA that provided the department with the dogs and some of the training for them.

"Working third watch, you don't find people on their best days. They don't call because they baked too many cookies," Wolverton said. "Because of that, my view of Dallas started to get jaded. I thought everyone hated the police department." 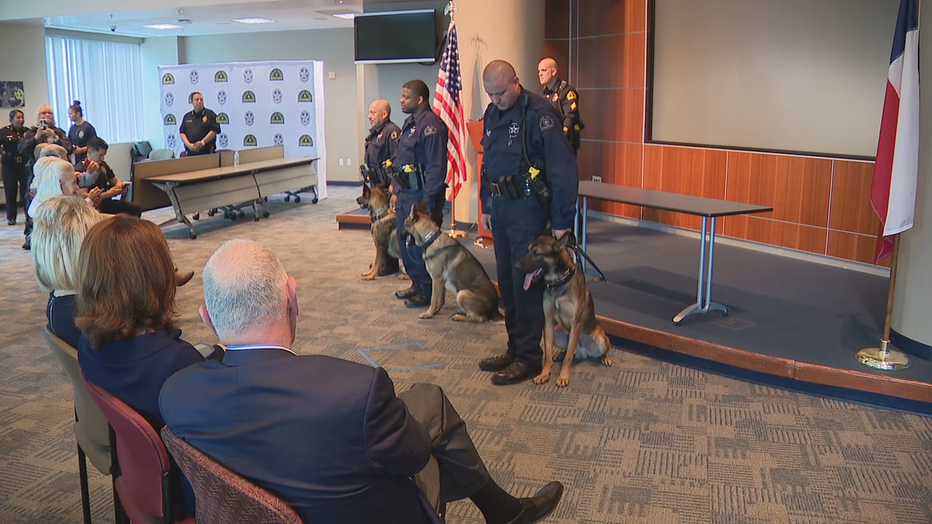 The O’Donnell’s got to meet the dog they donated that ended up with DPD, Bear.

"We love dogs so much, we have four now," Sterling O'Donnell said. "This was just a good way to help out the police department and keep drugs off the street."

"Kids and adults are naturally drawn to them, so that helps us when we try to engage these communities," Castro said.

In addition to detecting drugs, Castro said the K9s are able to find a lost child and apprehend the city's most violent felons.

"Some federal partners have dogs that sniff out cartridge casings from fired bullets. Dogs are incredible in their abilities," he explained.

One Community USA is working to raise money for additional dogs with DPD, as well as other departments.

Click here for more information on One Community USA.