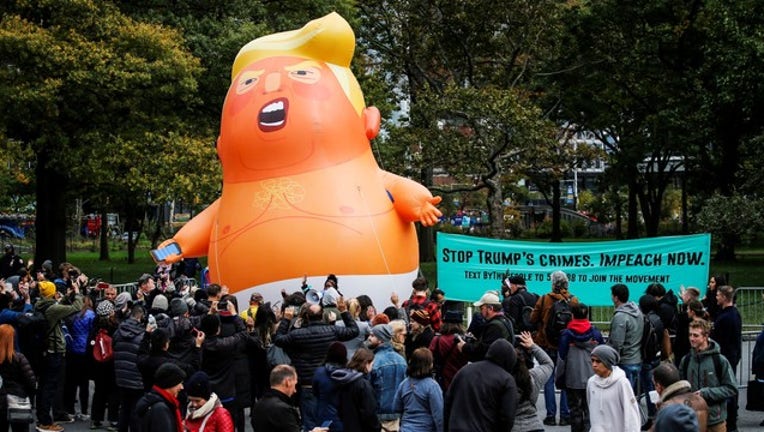 The Baby Trump Balloon rises after being inflated in Battery Park as part of an "Impeachment Parade" protest in New York City.

HOUSTON (FOX 26) - WASHINGTON (AP) - He was born in a London pub and now his clones are floating all over the U.S. - quite literally.

President Donald Trump increasingly is being tailed and trolled by an angry diaper-clad caricature armed with a cell phone. He's Baby Trump, the blimp who has become synonymous with resistance to the American president.

The origins story for Baby Trump began ahead of the president's visit to London last year when a group of activists gathered at a local pub to brainstorm ideas for a protest statement sure to get under Trump's skin. They succeeded beyond their wildest expectations, with a 20-foot blimp that flew near Parliament during the protests surrounding Trump's first visit to the United Kingdom and made a return appearance this summer when the president came for a state visit.

Their mission: exposing Trump "for what he is - an incredibly dangerous man-child," says organizer Kevin Smith.

Now, the Trump baby (cloned multiples times over) has become a world traveler and something of a celebrity for opponents of the president. He's also emerged as a rallying point for some supporters of the president, who see the blimp as evidence of just how over-the-top the opposition has become.

Baby Trump is booked for an upcoming appearance near the National Mall on July 4, when the president is due to speak at an Independence Day event. He went west for the Los Angeles women's march in January; he's been to the U.S.-Mexico border in support of migrants; he made his way to Orlando, Florida, last week to protest the president's 2020 campaign kickoff rally; and he's something of a regular outside Trump's Mar-a-Lago resort when the president visits Palm Beach County. The original (currently in a suitcase in the U.K.) has flown in Scotland, Ireland, France and Argentina.

The orange balloon depicting the president features yellow hair, a snarling face and outstretched arms, one of them equipped with a cell phone for tweeting. The White House, which declined to comment on the phenomenon, went out of its way to keep Trump from coming into contact with the blimp during his visit to the U.K. earlier this month, when Trump moved around mostly by helicopter to avoid protesters.

Many of the president's supporters don't find the balloon even a bit funny.

Ivonne Miro, who waited in a blocks-long line to hear the president in Orlando last week, called it disrespectful.

"It should not be like that," Miro said. "You should respect the president no matter what."

Six U.S. clones of Baby Trump are now available for short-term "adoption" from a resistance group in New Jersey that supplies them for protests around the U.S.

The protesters who haul them around say they do it because the image supports what they believe in - and to take a poke at Trump, according to Jim Girvan, of Branchburg, N.J. He led a GoFundMe campaign to raise money to bring the blimp stateside that was so successful - it raised $24,000 - that activists were able to buy six exact replicas of the one that flew in London. The only difference is a release valve that was necessary to comply with FAA regulations.

In Washington state, a group called the Backbone Campaign also has a Baby Trump that has flown at the border in support of migrants and in California and the Northwest.

"Utilizing humor and satire and spectacle is strategic in that it bolsters the spirit of the folks who otherwise would feel demoralized," said Bill Moyer, the group's executive director and founder. "And in certain circles, it could instill doubt."

Not with Trump supporter Greg Sinadinos, an employment benefits consultant from Tampa. He said he welcomed the blimp in Orlando because it reflects "how crazy they get in the opposition."

"It is 'Trump derangement syndrome' at its best," Sinadinos said.

The balloon, generally known as "Trump Baby" in England, has also spawned T-shirts, stickers, mugs and Halloween costumes. But Smith, one of the London organizers, said the people behind the development of the blimp aren't interested in profiting off their design.

"People are using Trump Baby as a means of trolling Trump," Smith said. "We're good with that."

In New Jersey, Girvan's group, People's Motorcades Inc., allows applicants to "adopt" a Baby Trump for protests and other events. "Our Babies are lonely and in need of good parents that will show them off," said the group's website.

Applicants pay for the costs of permits, transportation and set-up, and it's not cheap.

Mark Offerman, "adoptive parent" of the Baby Trump in Florida, said it requires about $1,500 worth of helium to inflate it. Cold air can be used instead to cut costs, but the image may not be as dramatic as when Baby Trump takes flight.

Before Trump spoke in Orlando, about 100 people gathered a few blocks from Trump's rally site to watch as Baby Trump took about a half-hour to inflate to its full 20 feet. The crowd clapped, cheered and took selfies - but the blimp had to stay on the ground due to air restrictions related to the president's appearance.

"I definitely like being the provocateur," Offerman said. "But the reason I'm doing it is real. This man is a danger."