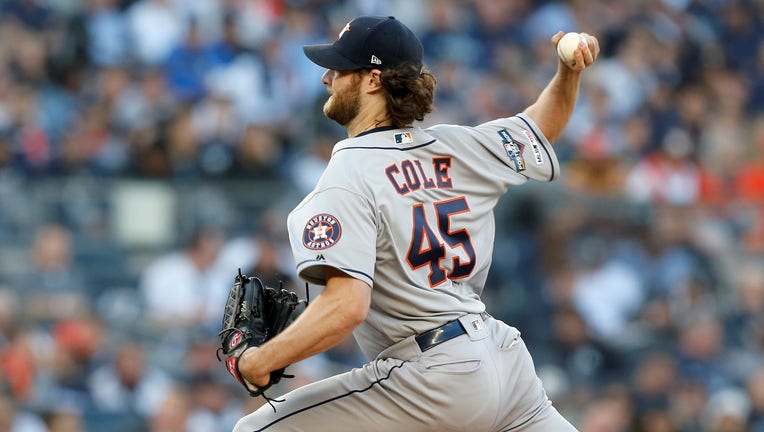 NEW YORK, NEW YORK - OCTOBER 15: (NEW YORK DAILIES OUT) Gerrit Cole #45 of the Houston Astros in action against the New York Yankees in game three of the American League Championship Series at Yankee Stadium on October 15, 2019 in New York City. The

SAN DIEGO - Gerrit Cole and the New York Yankees have agreed to a record $324 million, nine-year deal, a person familiar with the contract told The Associated Press on Tuesday night.

The person spoke on condition of anonymity because the agreement had not been announced.

Cole, the biggest prize of the free-agent market, surpassed the $245 million, seven-year contract Stephen Strasburg finalized with the Washington Nationals on Monday for most total money for a pitcher and for his $36 million average annual value. Agent Scott Boras negotiated both deals.

Cole was drafted by the Yankees in the first round out of high school but chose to go to UCLA, then was drafted by Pittsburgh. Traded after the 2017 season, he transformed his career in two seasons with the Houston Astros.

He went 20-5 with a 2.50 ERA last season as the Astros reached the World Series, finishing second to teammate Justin Verlander in AL Cy Young Award balloting.