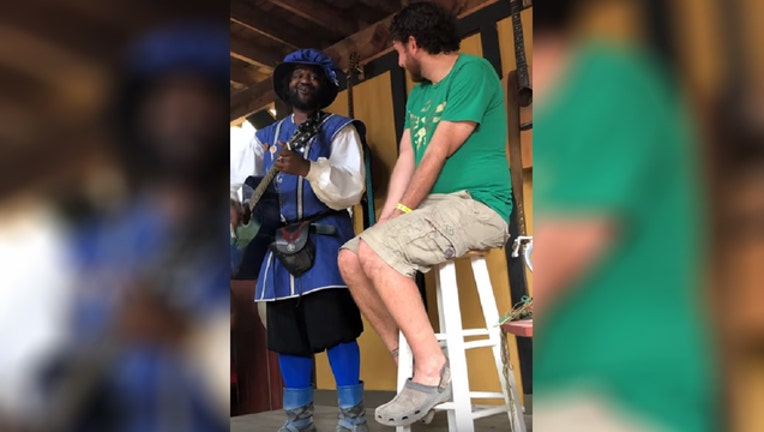 FAIRBURN, Ga. (FOX 5 Atlanta) - Minstrels are known to meld poetry and music, often turning to the subject of true love. But it's not every day they sing of their own.

One minstrel at the Georgia Renaissance Festival ended this year’s Faire in the most incredible way. After each day, many of the performers gather at the pub stage closest to the exit to send off guests and unwind from a long day, but this performance was extra special for one master musician and his boyfriend.

Dexter shared the sweet video on his YouTube page. It shows him on stage dressed in a blue period costume and matching blue guitar. Through the multiple conversations, he announces he has a new song.

"Pipe down, you lot. This is a pub!" a woman in the audience yells.

“Lord Matthew, would you please join me on stage?” Dexter requests, explaining he needs assistance with this song.

Matt then perches himself on a barstool as Dexter begins his song.

Toward the end of Dexter's song, he puts his guitar aside and swiftly takes a knee as he pulls his hat off, grabs a box from it with a ring inside, and opens it.

The pub erupts in cheers, prompting Dexter to visually calm them.

"...and I'll be your husband if you wear my ring!" Dexter sang a Capella.

Dexter then places a hand over Matt's heart and continues, "If you'll have me, and be my everything."

The disorganized cheers of the pub quickly turn into a unified chant of "He said 'yes!'"

Dexter said the two have been friends for years and while he felt an instant connection, Matt wasn’t available at the time. Still, the two became fast friends.

“We like many of the same things, and enjoy being nerds together,” Dexter said. “Unfortunately, he had to move away. But it did nothing to deter our friendship and bond.”

Despite the distance, their relationship bloomed and a choice was made. This past January, Dexter made the move to be closer to Matt.

“Long distance is hard and complicated, but I cared about him too deeply to let it be an obstacle I couldn't overcome,” Dexter explained. “Apparently, Matt felt the same, and from the moment he kissed me, I knew I had truly found something special with him.”

As their love grew, Dexter devised the best proposal.

“We both love the Renaissance Festival, and I happened to work there. I took most of the day off to spend it with him, making sure he hopefully had the best day possible and then ended the day with his song.”

And judging by the video, it was.

“I love him more with each passing day. It's easy. He's the sweetest guy I know. He's supportive, sensitive, and very handsome. I knew I wanted to marry him.”