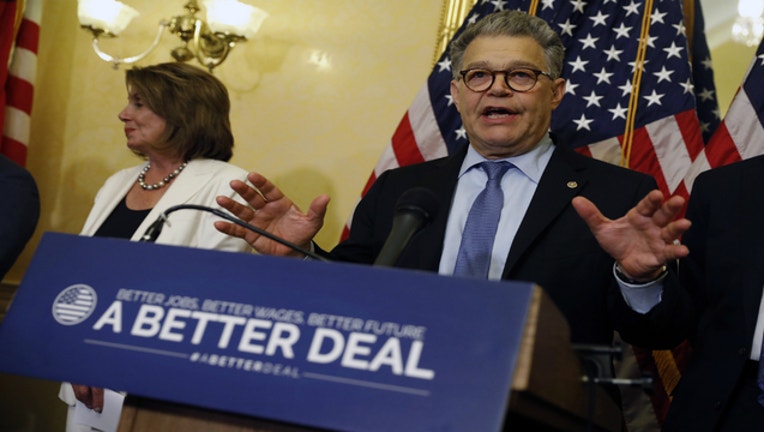 WASHINGTON (AP) -- - A second woman has accused Minnesota Sen. Al Franken of improper conduct, saying he put his hand on her bottom as they posed for a picture at the Minnesota State Fair in 2010 — after he had begun his career in the Senate.

Lindsay Menz told CNN last week for a report broadcast Monday that the interaction made her feel "gross." She said she immediately told her husband that Franken had "grabbed" her bottom, and she said she posted about it on Facebook.

Menz's allegation comes days after a Los Angeles broadcaster, Leeann Tweeden, accused Franken of forcibly kissing her during a 2006 USO tour. Franken already faced a Senate ethics investigation over Tweeden's allegation, but the Menz allegation is potentially more damaging for Franken because it would be behavior that occurred while he was in office.

Franken, a Democrat, told CNN he didn't remember taking the photo with Menz, but said in a statement to the network that he feels badly that she felt disrespected.

"I take thousands of photos at the state fair surrounded by hundreds of people, and I certainly don't remember taking this picture," Franken told CNN. "I feel badly that Ms. Menz came away from our interaction feeling disrespected."

Menz, 33, who now lives in Frisco, Texas, said her father's business was sponsoring a radio booth at the Minnesota fair and that she took photos with several elected officials and political candidates as they stopped at the booth.

She said as she posed with Franken, he "pulled me in really close, like awkward close, and as my husband took the picture, he put his hand full-fledged on my rear," Menz said. "It was wrapped tightly around my butt cheek."

Menz said she told her husband, Jeremy Menz, and father Mark Brown about it right away. Both men affirmed that to CNN. Menz also said she posted the photo with Franken on Facebook on Aug. 27, 2010, and when her sister commented on the photo, she replied: "Dude -- Al Franken TOTALLY molested me! Creeper!"

Franken, 66, is the latest public figure to be caught in the deluge of revelations of sexual harassment and misconduct that have crushed careers, ruined reputations and prompted criminal investigations in Hollywood, business and beyond.

He has apologized to Tweeden, and she has accepted the apology, but a handful of Democrats have called for him to resign. Republicans, still forced to answer for the multiple allegations facing Alabama Senate candidate Roy Moore, joined in pressing for an expected investigation by the Senate Ethics Committee. Franken said he would welcome it.

Franken canceled a sold-out book festival appearance scheduled for Monday in Atlanta to speak and promote his book, "Al Franken, Giant of the Senate." He hasn't appeared in public since Tweeden's allegation.