The death of Breonna Taylor, a Black woman who was killed by police in her home in Kentucky, has sparked a national reckoning on race.

The death of Breonna Taylor, a Black woman who was killed by police in her home in Kentucky during a botched raid on March 13, 2020, sparked a national reckoning on race.

The anger over her death and the process that led armed officers to her door helped spur massive racial injustice protests in the summer of 2020, along with the deaths of Ahmaud Arbery and George Floyd.

In the two years since Taylor was shot and killed, the city of Louisville has seen several policing changes. At the national level, Taylor’s name and story continue to be a rallying cry for racial justice, especially this month after the acquittal of the only officer to be charged in connection with the raid that caused her death.

Here is a look at what’s happened and what’s changed in the two years since Taylor’s death:

What happened the night Breonna Taylor was killed?

Taylor, a Black 26-year-old Louisville emergency medical worker, was fatally shot in her apartment during a raid by plainclothes narcotics detectives on March 13, 2020.

Taylor was shot by two Louisville police officers after they broke down her front door and returned fire when her boyfriend fired a handgun. Her boyfriend fired his gun once, saying later that he feared an intruder was entering the apartment.

One officer was struck, and he and two other officers fired 32 shots into the apartment, striking Taylor five times.

No drugs were found during the search.

Her boyfriend was arrested for shooting an officer.

The 1st year after her death

Six weeks after her death, Breonna Taylor’s family filed a wrongful death lawsuit — which was eventually settled for $12 million — challenging the police narrative.

Meanwhile, her death was flying under the media radar as the COVID-19 crisis shut down society, but George Floyd's death in Minnesota and the release of a chilling 911 call from Taylor's boyfriend in late May sparked national interest in the case.

The no-knock search warrant used to enter her apartment was eventually found to be flawed, and the police detective who sought it was fired in January 2021. The detective was found to have based the warrant on an unverified allegation that a drug-trafficking suspect was receiving mail at Taylor's apartment.

Later, Kentucky's attorney general determined officers fired in self-defense after Taylor's boyfriend shot at them first as they entered the apartment. Her boyfriend's charges of attempted murder were eventually dropped.

Though the three officers involved in the raid, Brett Hankison, Myles Cosgrove and Joshua Jaynes, have all been fired, none have been charged for causing Taylor’s death, despite protests nationwide.

Only one officer, Hankison, faced related criminal charges: three counts of wanton endangerment for allegedly firing wildly into the apartments of Taylor's neighbors.

Brett Hankison’s trial began in January 2022 for charges relating to the botched raid, but not relating to Taylor’s death. Hankison did not fire any of the bullets that killed Taylor.

He faced charges for allegedly endangering neighbors the night he fired into Taylor’s apartment.

On March 3, 2022, Hankison was found not guilty after a panel of eight men and four women deliberated for about three hours.

A few dozen demonstrators held a brief march in Louisville the night after the jury delivered its verdict, returning to the public square where they gathered for months in 2020.

"Everybody got justice for 2020 but in Kentucky we can’t even get wanton endangerment charges," Tyra Walker, co-chair of the Kentucky Alliance Against Racist and Political Repression, said at the gathering.

A Kentucky jury cleared former police officer Brett Hankison of charges that he endangered neighbors when he fired shots into an apartment during the 2020 drug raid that ended with Breonna Taylor’s death. Hankison had been charged with three counts of wanton endangerment for firing through sliding-glass side doors and a window of Taylor's apartment during the raid that left the 26-year-old woman dead.

While loved ones say Hankison’s acquittal highlights the progress towards racial justice that must still be made, Louisville’s mayor Greg Fischer

released a memo Friday outlining "the many substantive changes initiated over the past two years."

Most notably and famously, "Breonna’s Law" has been implemented, which banned no-knock warrants in Louisville and expanded the requirements for officers to wear body cameras. 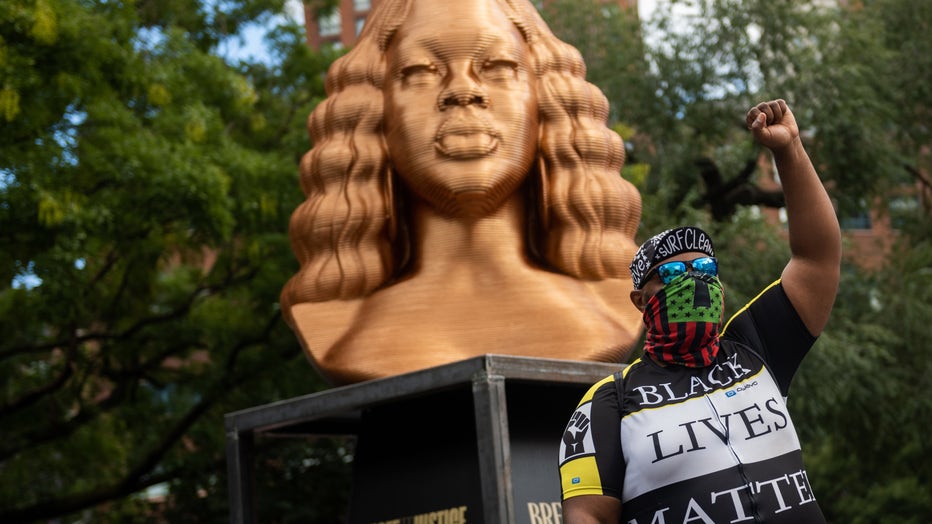 The Louisville Metro Police Department has undergone several evaluations and investigations, according to the mayor, resulting in several policy changes. The department also got a new chief, Erika Shields.

Mayor Fischer said a new program is set to begin in the city later this month which will deflect a number of 911 calls to a non-police response team focused on problem-solving, de-escalation and referral to other appropriate community services.

You can read more from the mayor here.