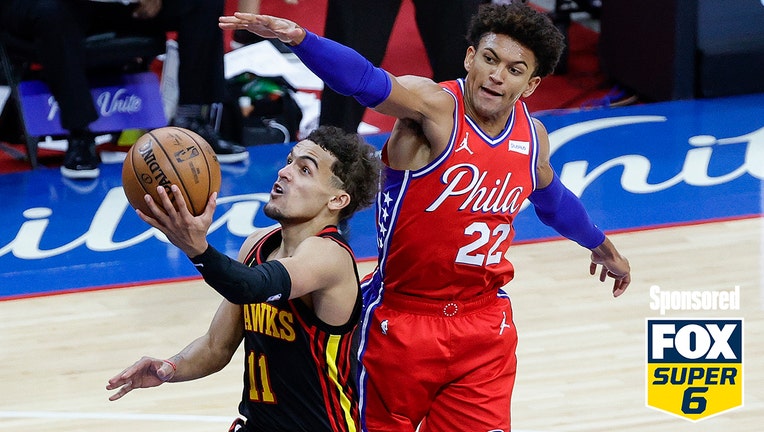 Trae Young of the Atlanta Hawks shoots under Matisse Thybulle of the Philadelphia 76ers during Game 1 of the Eastern Conference second round series at Wells Fargo Center on June 06, 2021 in Philadelphia, Pennsylvania. (Photo by Tim Nwachukwu/Getty Im

There’s a scene in "Rocky" when Duke, Apollo Creed’s blunt-talking trainer, looks at the heavyweight champion after a few rounds and tries to wake him up a bit.

That should be the message that Doc Rivers is telling the Philadelphia 76ers squad Tuesday evening because after you were finished with Triple H ringing the replica of the Liberty Bell and Joel Embiid encouraging the Wells Fargo Center with his arms raised on Sunday, the Atlanta Hawks came out and landed an uppercut wakeup call for the ages in a 128-124 victory in Game 1 of the Eastern Conference semifinals that felt a lot more lopsided than that.

The key is to see if the top-seed 76ers rallied enough late to grab some momentum and get what essentially is a must-win Game 2 at home before their crowded and full-throated masses or does Trae Young and the Hawks have the ability to shock everyone one more time in this remarkable post-season.

Game 2 of the Sixers-Hawks series is the FOX Super 6 game of the night. Answer all six questions correctly and you could win $1,000. It’s free and easy to play on your phone or mobile device.

Here are the six questions at play for Tuesday’s Game 2:

At the end of the 1st quarter, which team will be winning and by how much?

To learn the story of Game 1, all you have to understand is that Atlanta had a 15 point lead at the end of one and shot the lights out against a Philadelphia defense that had Young being guarded not by Ben Simmons or even Matisse Thybulle, but Danny Green – perhaps the weakest defensive link in Philadelphia’s chain. It would be doubtful if the Sixers make that mistake again in Game 2.

Will Joel Embiid have more than 25 points in the game?

Clint Capella is not chopped liver, folks. And yet he couldn’t seem to handle the hobbling Embiid in his first game back after a minor meniscus tear. The biggest questions are does Atlanta throw more of a double team on Embiid and is there a physical limitation to Embiid’s game after just one day off following a 38-minute appearance.

Who will be the top scorer of the game?

We could be fancy here and try to prove how smart we are with all these ancillary facts about Bogdan Bogdanovic from the outside as a possible choice in this one. It is either Embiid or Young and we all know it.

Who will be the second-leading scorer for the Hawks?

Hey, a chance to give ancillary facts about Bogdanovic! Sunday was his first game against the Sixers this year and he threw in 21. In six previous games against the Sixers in his career, Bogdanovic had averaged 10 points a game.  In other words, John Collins, who also had 21 on Sunday, may be the best bet here.

Which player will have the most rebounds in the game?

One thing that Embiid wasn’t particularly sharp at on Sunday was rebounding. He had nine, but he looked a little tentative at times on the defensive end of the floor in the middle of the paint, like he was protecting the knee or perhaps saving some energy. Capella is not chopped liver. He’s really good and he may be a smart play here.

Which team will win and by how much?

It did not go unnoticed in Philadelphia that the Sixers' defense took control a few minutes too late on Sunday and got the once 26-point lead down to 2 in the waning seconds. If the adjustments that the Sixers have to make - namely never having Green guard Young again for the rest of the series - then there should be some momentum going forward. And if that’s the case, Philly sends the series back to Georgia even for what appears to be a long-haul seven gamer.