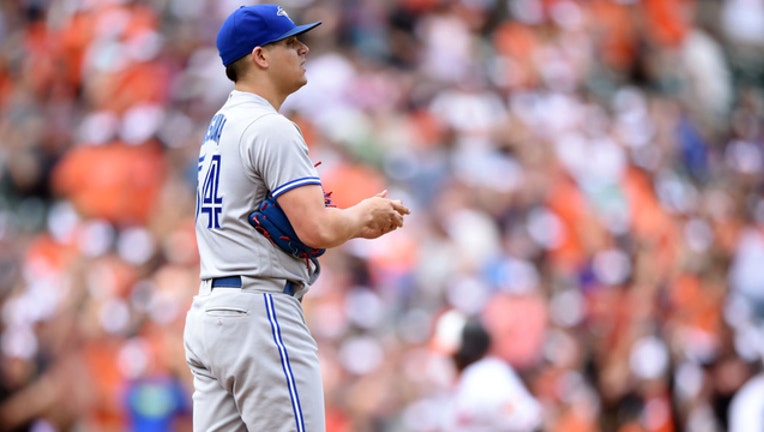 Roberto Osuna of the Blue Jays looks on after giving up a home to Welington Castillo #29 of the Orioles in the ninth inning to tie the game at Oriole Park at Camden Yards on September 3, 2017. (Photo by Mitchell Layton/Getty Images)

The World Series champs acquired the 2017 All-Star from Toronto on July 31 for Ken Giles in a swap of closers.

The 23-year-old Osuna had a 2.93 ERA in 15 games for the Blue Jays this season when he was penalized.

The Houston Astros released this statement regarding Robert Osuna:

On August 4th, Roberto Osuna willfully and successfully completed his MLB domestic violence program requirements. Because of the ongoing legal proceedings, very little can be said about the incident itself or the case involving Roberto.

We are now focused on ensuring that Roberto makes a positive impact off the field while he is a member of the Houston Astros. We are providing Roberto with the benefit of a great clubhouse and organization as a supportive environment for this fresh start. We welcome being held accountable for all of our personnel decisions.  Time will tell which ones were right and wrong.  We believe that Roberto will not let us down.  If there is any type of issue in the future, we will take immediate and decisive action – it will not be tolerated.

This was an extremely difficult decision for our organization. We understood that it would cause significant debate. We are strong believers in protecting the rights of victims and remain committed to having a positive impact on our community.  We will use this decision to significantly increase our support, raise awareness, and influence change regarding the issues of domestic violence and abuse of any kind. We have engaged with Houston Area Women’s Center, Texas Council on Family Violence, and National Network to End Domestic Violence and look forward to working with them.  We passionately maintain our commitment to our fans and the city of Houston. We have always been and will continue to be strong corporate citizens for our community.