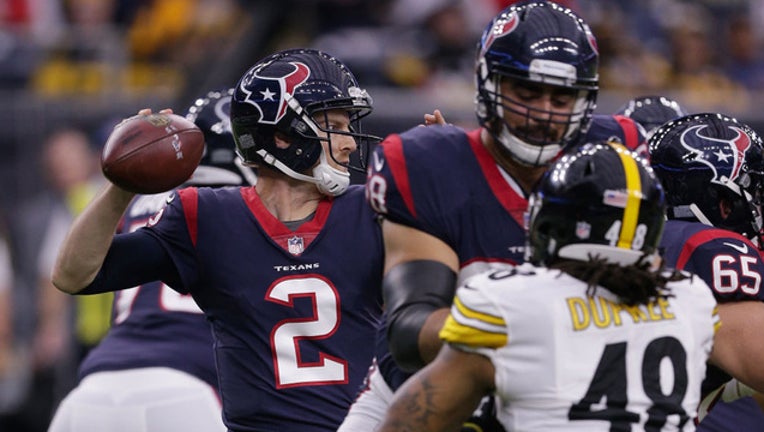 HOUSTON, TX - DECEMBER 25: T.J. Yates #2 of the Houston Texans throws out of the pocket Pittsburgh Steelers at NRG Stadium on December 25, 2017 in Houston, Texas. (Photo by Bob Levey/Getty Images)

HOUSTON (AP) - Ben Roethlisberger threw for 226 yards and two touchdowns and the Pittsburgh Steelers clinched a first-round playoff bye with a 34-6 win over the Houston Texans on Monday.

Roethlisberger threw passes to six different players as Pittsburgh (12-3) romped over the lowly Texans (4-11) despite missing NFL leading receiver Antonio Brown, who sat out with a calf injury.

The Steelers led 20-0 at halftime after taking advantage of two turnovers by the Texans. Le'Veon Bell added a 10-yard TD run late in the third quarter and rookie JuJu Smith-Schuster made it 34-6 with an 18-yard touchdown grab in the fourth.

Bell finished with 14 carries for 69 yards and Smith-Schuster had six receptions for 75 yards.

T.J. Yates was 7 of 16 for 83 yards and a touchdown for the Texans, who lost their fifth straight game and for the eighth time in nine games. Yates made his second straight start since Tom Savage sustained a concussion. Yates left the game briefly on Monday to be evaluated for a concussion and his replacement, Taylor Heinicke, sustained a concussion on his only full possession.

The Steelers hurried and harassed Yates all day with Mike Hilton leading the way with three sacks and three quarterback hits and Cameron Heyward adding two and forcing a fumble.