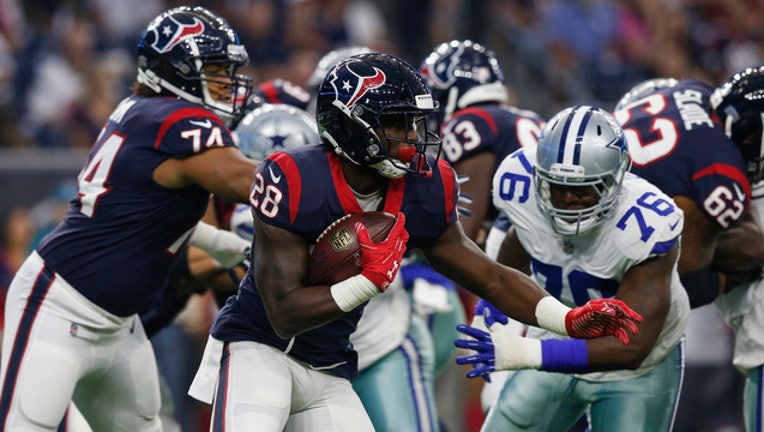 Alfred Blue #28 of the Houston Texans carries the ball defended by Kony Ealy #76 of the Dallas Cowboys in the first half of the preseason game at NRG Stadium on August 30, 2018 in Houston, Texas. (Photo by Tim Warner/Getty Images)

HOUSTON (AP) - Houston Texans rookie running back Terry Swanson rushed for a 37-yard touchdown run late in the fourth quarter to lift the Texans to a 14-6 win over the Dallas Cowboys in their preseason finale Thursday night.

The undrafted rookie running back out of Toledo, who served as an understudy to the Chiefs' Kareem Hunt in college, found a hole with five minutes remaining in the fourth quarter to put the Texans up two scores. Swanson finished with 69 yards on 17 carries.

Both teams rested their starters.

Houston took a 7-3 lead in the first quarter after third-round pick safety Justin Reid intercepted Cooper Rush's pass to set up a 4-yard touchdown run by Alfred Blue. Blue, competing for the backup job behind Lamar Miller, rushed for 18 yards on four carries, while Troymaine Pope rushed for 21 yards on five carries.

The Cowboys scored on two field goals from backup kicker Brett Maher, one on their opening drive from 57 yards and one late in the fourth quarter from 41.

Texans backup quarterback Brandon Weeden started and went 3 for 9 for 22 yards. Behind Weeden, Joe Webb went 11 for 18 for 136 yards.

Rush played the entire first half and some of the third quarter, finishing 14 of 25 for 83 yards and two interceptions. Behind Rush, Mike White went 13 for 21 for 118 yards.

The two Texas teams will have a regular-season rematch in Houston in Week 5 on "Sunday Night Football." Dallas leads the series 3-1 and has won the last three meetings since the Texans won their first-ever matchup in their inaugural game in 2002.

Cowboys starting quarterback Dak Prescott served as a team captain during the coin toss, even wearing his helmet. Before kickoff, however, Prescott put his helmet away and immediately exchanged his cleats for sneakers to settle in as a sideline spectator.

Cowboys running back Ezekiel Elliott, who didn't play during the preseason, said at halftime he's excited to get back on the field.

"Camp is long, the preseason is long, but there is nothing like that first game when the lights come on for real," Elliott said.

Texans quarterback Deshaun Watson also wore sneakers, even fashioning a makeshift bandana out of a towel. While many Texans starters wore baseball caps on the sideline, nose tackle D.J. Reader stood out with a gray bucket hat.

No players from the Cowboys or the Texans kneeled during the national anthem.

With veteran punter Shane Lechler in a battle with rookie Trevor Daniel, the Texans alternated punts and placekick holding responsibilities. After Daniel excelled in the first half, he punted one out of bounds that went just 30 yards. Lechler followed with a booming 61-yard punt to the Dallas 20-yard line.

The Texans signed starting center Greg Mancz to a two-year contract extension on Thursday. Mancz, an undrafted free agent out of Toledo in 2015, played 10 games, starting seven, in 2017. Houston used a second-round tender on Mancz in the offseason and will pay him $1.907 million this season.

No injuries were announced during the game.

Cowboys (0-4): open their season at the Carolina Panthers on Sept. 9.

Texans (3-1): visit the New England Patriots for their season opener on Sept. 9.