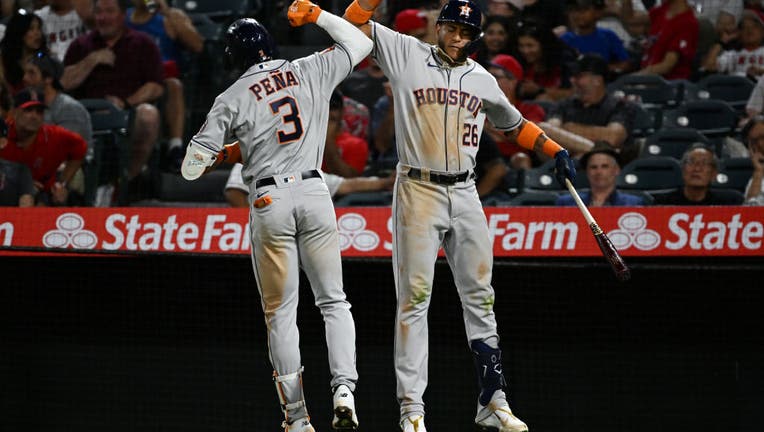 The Astros rookie got to see the looks on his parents' faces when he made that dream a reality.

Pena connected for the first time while parents Geronimo and Carmen Cecilia were being interviewed on the broadcast, a moment made for highlight reels while Houston thumped the Los Angeles Angels 13-6 Friday night.

Justin Verlander told Pena about the interview when he got back to the dugout, and the 24-year-old got to watch it after the game.

"It was pretty cool," said Pena, who had the balls from his first hit and homer in his locker after the game.

"You don't plan that. So when they told me they got that on camera, it was awesome to see."

Kyle Tucker hit two of Houston's six homers, with Jose Altuve, Aledmys Diaz and Alex Bregman also connecting. It's the 16th time Houston has had at least six homers in a game, and five of those have come since 2019. The Astros had 14 hits.

"I mean, this is what this team is capable of. When I got here (in 2020), guys were saying it happens fast. It does happen fast," manager Dusty Baker said.

Jared Walsh had three hits and drove in two for the Angels.

Pena, Houston's rookie replacement at shortstop after Carlos Correa signed with Minnesota, got his first big league hit with a single in the second inning. He then led off the seventh with a drive to left-center while his mom and dad were being interviewed in the stands by Apple TV+.
"I'm happy, happy now," Geronimo Pena said.

The homer sparked an eight-run inning that also included a three-run shot by Tucker and extended Houston's lead to 12-2. Tucker added a solo shot in the ninth.

"I just play the kid. You've got plenty of time to be serious," Baker said. "Just go out there and play to the best of your ability. It's great when you see a kid doing something outstanding."

Rafael Montero (1-0) was the winning pitcher while Oliver Ortega (0-1) took the loss.

Altuve went deep to left off Reid Detmers on the fifth pitch of the game. It was the 22nd career leadoff homer for the Astros second baseman.

The Angels answered with two runs in bottom of the first. Reigning AL MVP Shohei Ohtani led off with his first hit of the season, a bloop single to center, advanced to second on Anthony Rendon's hit and scored on Walsh's single. Rendon later scored on a passed ball.

Both starting pitchers went four innings and allowed two runs. Houston's Jake Odorizzi struck out two while Detmers bounced back from Altuve's leadoff homer to strike out three.
"His velocity early was maybe a little too high," Angels manager Joe Maddon said of Detmers. "I thought he kind of settled in better. He started using the slider more as opposed to just curveballs."

With Apple TV+ showing the game, Jose Siri made a diving catch in center to rob Brandon Marsh of a hit and scored the go-ahead run in the fifth.
Siri singled to lead off the fifth, stole second and advanced to third on Martin Maldonado's fly ball to left.

Siri appeared as if he was going to remain at third after Altuve's grounder, but he broke for home as soon as Rendon threw to first. Walsh might have had a chance to get Siri out with a good throw, but it was a high toss.

The Angels were on the verge of taking a 3-1 lead in the first after Marsh's single to left, but Michael Brantley made a great throw that took one bounce before catcher Maldonado tagged Walsh out at the plate.
Brantley has 57 outfield assists since 2011, ninth among active players.
Astros: 1B Yuli Gurriel is on the paternity list after flying back to Houston on Thursday night. Manager Dusty Baker said he expects Gurriel to rejoin the team before Tuesday's game at Arizona. IF Joe Perez was recalled from the taxi squad to fill Gurriel's roster spot.

Angels: OF Justin Upton was released. He was designated for assignment on April 2. The four-time All-Star is owed $19.5 million this season by the Angels after they couldn't agree on a trade.

Saturday - Justin Verlander is set to pitch for Houston for the first time since having Tommy John surgery late in 2020. The 39-year-old will face Noah Syndergaard and the Angels tonight. Verlander, a two-time Cy Young Award winner, returned to the Astros on a $25 million, one-year deal that includes a $25 million player option for 2023 conditioned on him pitching 130 or more innings in 2022. Syndergaard is making his first appearance for Los Angeles after leaving the Mets for a $21 million, one-year deal. He pitched just two innings for New York last season after two years away due to Tommy John surgery and setbacks during his recovery.