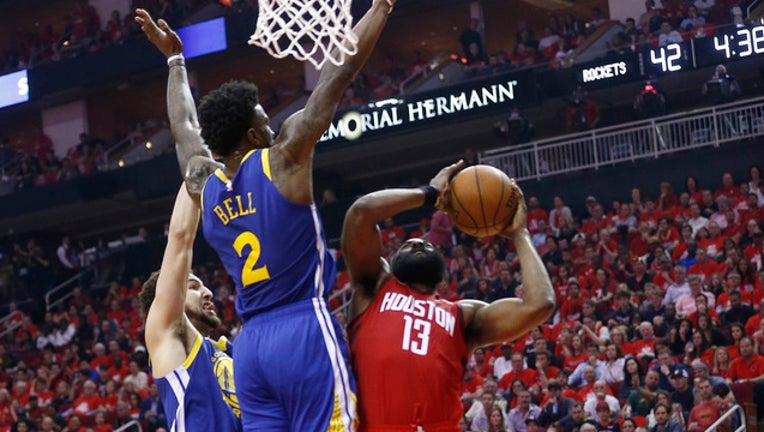 James Harden of the Rockets drives to the baskeet as Jordan Bell of the Warriors and Klay Thompson defend during Game 6 of the Western Conference Semifinals of the 2019 NBA Playoffs at Toyota Center on May 10, 2019. (Photo by Bob Levey/Getty Images)

HOUSTON (AP) - After Stephen Curry bounced back from the first scoreless first half of his playoff career to score 33 points in the last two quarters and help the Golden State Warriors eliminate the Houston Rockets and advance to the Western Conference finals on Friday night, coach Steve Kerr stopped to talk with his star's parents.

He said he told Dell and Sonya Curry: "If that game didn't personify Steph Curry, I don't know what does."

Curry's huge second half allowed the Warriors to overcome the absence of Kevin Durant and get the 118-113 win. He heard the chatter about how he'd struggled in this series entering this game and admitted that he was "pretty terrible" before halftime on Friday night.

"A night like tonight doesn't happen without belief in myself," Curry said.

Klay Thompson added 27 points to help two-time defending champion Golden State reach the conference finals for a franchise-record fifth straight year and eliminate Houston for the fourth time in five seasons. The Warriors did it with Durant sidelined by a calf injury sustained in the second half of their Game 5 victory.

"That was an absolute grind," Kerr said. "We're thrilled to be moving on and excited to have this one in our review mirror."

Harden's layup got the Rockets within three with less than a minute to go, but Thompson made a 3-pointer with 36.1 seconds remaining to extend Golden State's lead to 110-104.

Gerald Green then missed a 3 for Houston and the Rockets were forced to foul Curry. He made both shots before Harden's 3 got Houston within five at 112-107 with 24 seconds left.

The Rockets failed to score for a big chunk of the fourth quarter and had to watch the Warriors celebrate a series victory on their home court for the second straight season after they won the conference finals in Houston last year. Harden was 11 of 25 from the field, going 6 of 15 from 3-point range, and 7 of 12 on free throws.

"This one's going to leave a mark," coach Mike D'Antoni said. "This is not something you just get over. This one hurts. We played our best and they played their best, and we didn't knock them out. It was like a heavyweight fight. We didn't land the blows to at least get back to Golden State."

Curry struggled early, failing to score in the first half for the first time in 102 career playoff games, and had just 10 points through three periods. But he got going in the fourth, scoring 23 points.

"At halftime we're tied and I had zero points, you've got to like that situation," Curry said.

There were questions entering the game about how the Warriors would weather the loss of Durant - and his more than 34 points a game. But they didn't seem to miss a beat, getting 21 from Thompson in the first half before Curry closed it in the fourth.

"When you're missing one of the greatest players to ever play and the best scorer in the world, you can't collectively make up for what he does," Thompson said. "But you can step up in his absence and help out the point production."

The Rockets had a five-point lead to start the fourth and it was tied at 95 with about 7 ½ minutes to go after three points by Golden State's Shaun Livingston.

Harden and Curry exchanged baskets soon after that before both teams failed to score for the next 2 ½ minutes. Houston missed five shots in that stretch and the Warriors missed four before Kevon Looney made a layup to put Golden State on top 99-97 with just under four minutes left.

A 3-pointer by Curry gave the Warriors a five-point lead before Harden ended a scoring drought by the Rockets of almost four minutes with a 3-pointer to cut the lead to 102-100 with about 2 ½ remaining.

Harden was called for a charge after that before Curry scored all of Golden State's points in a 5-2 run that made it 107-102 with 90 seconds left.

Warriors: Durant didn't make the trip to Houston, remaining in the Bay Area to receive treatment for his injury. The Warriors said he'll be re-evaluated next week. ... The Warriors started Andrew Bogut for Durant and he had three rebounds and zero points. ... C Damian Jones, who is out with a torn pectoral muscle, has been cleared for contact drills and could be available later in the playoffs if the Warriors advance.

Rockets: Tucker had 15 points and has scored at least 10 points in eight of Houston's last 11 games. ... Clint Capela had with 10 points and 10 rebounds.

Kerr on the performance of Andre Iguodala, who made six 3-pointers and had 17 points: "That game was probably not winnable without Andre's contribution. Andre just does so much for us on both ends of the floor."

The Warriors move on to face the Denver-Portland winner with Game 1 scheduled for Tuesday night in Oakland.