A social media post in late August triggered the court fight. In the post, the Harris County clerk announced he was going to mail every registered voter in that county a vote-by-mail application.

In a high court Zoom meeting, Susan Hays, who was representing Harris County Clerk Chris Hollins, and Texas Solicitor General Kyle Hawkins presented arguments for and against the county mailing out vote-by-mail applications.

"Fraudulent votes are not acceptable, but the act of giving someone an application does not increase fraud,” said Hays.

Hawkins's arguments were mostly based on procedure. "This action that Hollins contemplates is a serious affront to electoral integrity on the eve of a national election,” said Hawkins.

A social media post in late August triggered the court fight. In the post, Hollins announced he was going to mail every registered voter in that county a vote-by-mail application.

Hollins has been vocal about making it easy to vote. "The 2020 election is too important and the stakes are simply too high,” he said during a voter rally on September 10th.

Researchers and U.S. election officials say that voting by mail does not lead to massive voter fraud.

Hollins has gone too far, according to Hawkins. "We have never seen, what we are seeing here, where applications to vote by mail are being sent in mass, hundreds of thousands, or even millions to people who have never asked for them and are probably not eligible to vote by mail,” he said.

The mailer from the clerk's office warns, in bold red letters, that not everyone who gets an application may be eligible to receive a ballot. Despite that, Hawkins warned someone could get a mail-in ballot by incorrectly claiming a disability. "There is the likelihood of voter confusion,” he said.

After weeks of bashing mail-in voting and suing Nevada for expanding their mail-in voting, President Donald Trump has changed his tune — at least when it comes to the critical swing state of Florida. Now he’s for it. Travis County GOP Chairman Matt Mackowiak joins Mike Warren on FOX 7 Austin to talk about this in greater detail.

In defense of the plan, Hays argued it would not cause confusion and is needed because of the outbreak of COVID-19. "Our election authorities around the state have a hard job in front of them, how to conduct an election in a manner that is safe,” she said.

Hays also argued her interpretation of state law that authorizes county clerks to "manage and conduct" early voting; allows for steps to reduce the risk of being exposed to a virus. "By increasing the ratio of voters who vote by mail, you decrease the bodies that come into the poll place,” she said.

Voting could be more difficult for people with disabilities

Al Kobach, a former Navy Seal and the immediate past president of Paralyzed Veterans of America, talks about the challenges the disabled face when voting.

Hawkins countered, saying "manage and conduct" only applies to things like providing air conditioning and printers. "If Hollins' actions are allowed to process, it will fundamentally upset the balance of power between the state and the counties, that conception of power has existed for a century,” he said.

Adding to the debate is that mail-in ballot applications have already gone out to people age 65 years and older, which is allowed by law. More than 200,000 in Harris County have been returned and processed. It was also pointed out state law allows private organizations to mass mail applications.

FOX 7 Discussion: Should Texans be allowed to vote by mail?

Should Texans be allowed to vote by mail because of the COVID-19 pandemic? Travis County GOP Executive Director Brian Ruddle and Ed Espinoza from Progress Texas join Rebecca Thomas on FOX 7 Austin to share their perspectives.

It’s unclear when the Court will issue a ruling.

CLICK HERE FOR THE LATEST INFO ON THE CORONAVIRUS OUTBREAK

FOX 7 Austin is working to keep you up to date with coronavirus, with both local and national developments. You can also get the latest COVID-19 news from around the country at coronavirusnow.com. 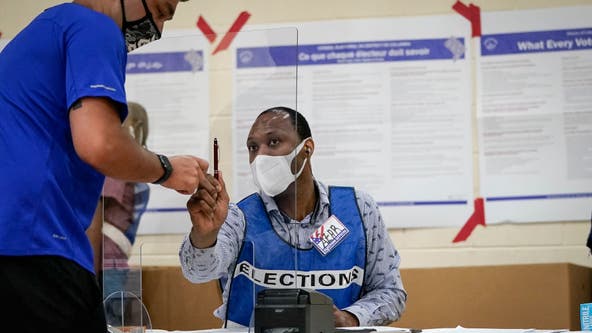