Houston - A severe thunderstorm moved quickly through the Houston area early Saturday morning, accompanied by heavy lightning and gusty winds. At 6:15 a.m. Centerpoint Energy was reporting 30,282 outages in the area.

A Flash Flood Watch remains in effect until 1:00 p.m. this afternoon for portionsof south central Texas and southeast Texas including the following counties: Austin, Brazoria,.Chambers, Colorado, Fort Bend, Galveston, Harris, Liberty, Matagorda, Montgomery, Polk, San Jacinto, Waller and Wharton.
A slow moving upper level low pressure system over Central Texas will shift slowly eastward today ending the threat of widespread heavy rainfall. A line of showers and thunderstorms racing east through the Watch area early this morning will leave an area of steady light to moderate rain in its wake for a few hours. Most of the rainfall should be ending by 9 or 10 am. The flood watch may be cancelled early if this occurs. As the upper low moves across the northern parts of Southeast Texas area this afternoon scattered showers and thunderstorms will likely redevelop north of the watch area or possible in the current watch. At this point it doesn't not appear to warrant an extension of the flash flood watch. With the wet ground any rainfall will of course be slower to drain and ponding of water on roadways will be possible. 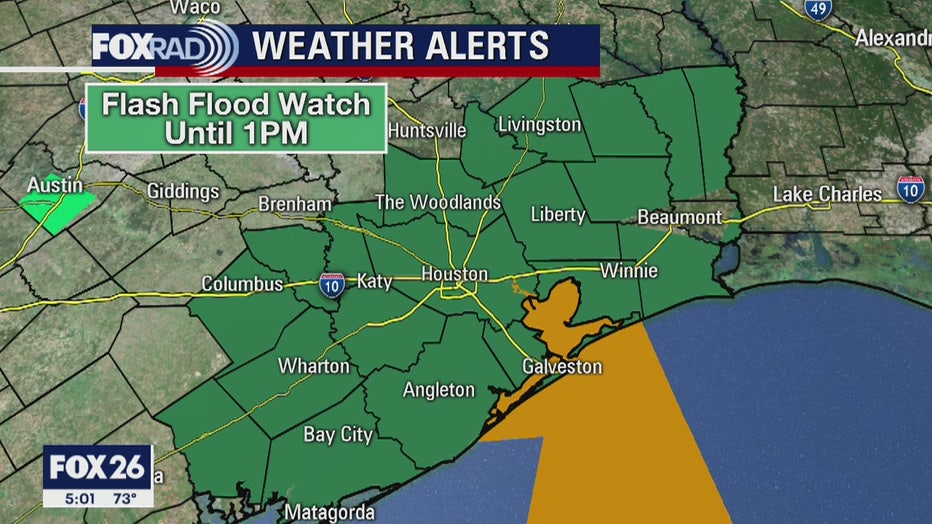 These storms with heavy rainfall may be capable of flooding roadways. Low water crossings may flood becoming impassable and dangerous. Small creeks and bayous may see minor rises.

A Flash Flood Watch means that conditions may develop that lead to flash flooding. Flash flooding is a very dangerous situation.You should monitor later forecasts and be prepared to take actionshould Flash Flood Warnings be issued.