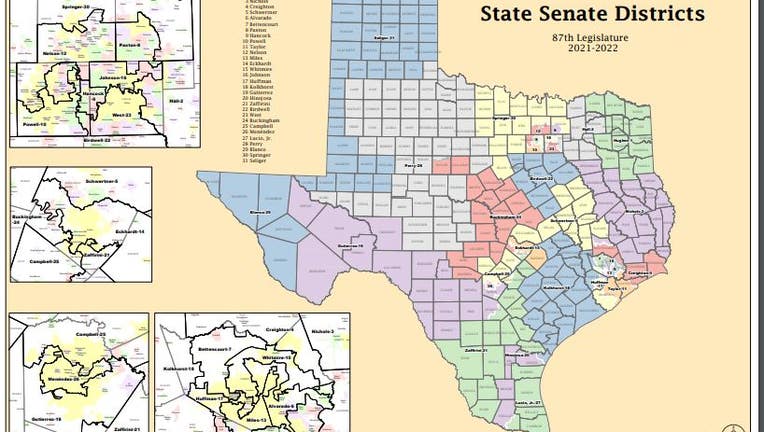 Editor’s note: This coverage is made possible through Votebeat, a nonpartisan reporting project covering local election integrity and voting access. The article is available for reprint under the terms of Votebeat’s republishing policy.
By Yasmeen Khalifa, The Texas Tribune

One of the tasks facing Texas lawmakers this year is the complicated and contentious process of redistricting, the decennial redrawing of maps for the state’s congressional, legislative, and State Board of Education boundaries.

Who you can elect at the national, statewide and even local levels depends on which district you live in. And the way those district maps are drawn often decides which party controls the national and state legislative bodies, and the maps will remain in use for as long as 10 years. Politicians have the power to group voters in a way that will give them a partisan advantage as long as they are not discriminating on the basis of race.

Republicans will control that process in 2021. But the mapmaking will be complicated and challenging, given the state's recent demographic shifts, the inevitable legal battles, and the fact that it will be happening in the middle of a pandemic.

Here’s what you need to know about redistricting and how it will affect you for the next decade.

How it works in Texas

Every 10 years, a U.S. census is conducted to count every resident in the country. After that, state and local governments use the new population data to draw new congressional and state legislative maps.

The Texas Legislature has a fixed number of seats — 31 in the Senate and 150 in the House. So Texas’ legislative districts change every 10 years, but the total number of lawmakers doesn’t. But the number of Texas congressional districts can change every 10 years relative to the state’s share of the U.S. population. Texas has grown faster than most other states over the last decade, adding close to 4 million people since 2010. That means the state’s allotted U.S. House seats will likely grow to 38 or 39, up from 36 current seats.

Here’s what you need to know about redistricting and how it will affect you for the next decade.

The State Board of Education, state appeals court districts, and some local governmental bodies like city councils, county commissioners courts, and school district boards will undergo redistricting in 2021, too. The local boundaries are drawn by local governments.

While every state has its own redistricting procedures, all states must also abide by guidelines set forth by the Voting Rights Act of 1965, which was designed to combat racial discrimination in the voting process. This includes redistricting techniques like "packing and cracking," which either divide large minority communities across several districts to weaken their voting impact or pack them into a few heavily concentrated districts to avert their voting power from the remainder of the region or state. On top of the Voting Rights Act’s redistricting rules, all legislative, congressional, and SBOE districts must meet two basic criteria outlined in the U.S. Constitution and federal law: equal or near-equal populations and preservation of the right to vote regardless of race, color or language.

For U.S. House districts, populations must be close to equal, while Texas House and Senate districts may deviate by up to 10% from the ideal district population, which is the number of residents if all districts were populated equally.

During the session, the Senate and House Redistricting Committees, each made up of 15 members, must work together to redraw the maps fairly and equally. They’ll also work alongside expert mapmakers and the Texas Legislative Council and receive input from the public.

Members of the public typically have access to the same program, RedAppl, as lawmakers so that they can draw alternative maps for legislators’ consideration. In the past, people could access RedAppl through workstations in the Capitol. While specific procedures for accessing that program in the Capitol are still under consideration, it is anticipated that some sort of access will still be available in 2021. Plans prepared on other software are also acceptable in .txt or .csv formats.

Once bills to enact new state redistricting plans are ready for approval, they’ll follow the same path through the legislature as other legislation. If the House or Senate cannot agree on maps, the job of redistricting moves on to the Legislative Redistricting Board, a five‐member body made up of the governor, the lieutenant governor, speaker of the House, comptroller, and land commissioner.

Gerrymandering and a history of legal battles

In redistricting, lawmakers are not only fighting over voters’ rights and fair representation, but also for their own political survival. Oftentimes, rather than working together to draw district maps fairly, representatives across the country, have focused on moving lines to protect themselves, stay in office, and put their enemies at a disadvantage, an act called gerrymandering.

Redistricting expert Michael Li says the upcoming maps could prevent the Legislature and the congressional delegation from reflecting the population of Texas.

"If you go back to John Adams and the framers, they talk about how legislatures and Congress should be an exact portrait of the people as a whole," said Li, senior counsel at New York University's Brennan Center for Justice. "When you put your thumb on the scale through a highly politicized map-drawing process as typically occurs in Texas, that doesn’t take place."

Maps created with personal gain in mind are often challenged, however. In Texas, it would be unusual if, at the very least, some redistricting plans didn’t end up in state or federal court.

In fact, for the past decade, the state has been dealing with the legal implications of the 2011 redistricting maps that ended up being rejected by the federal government. Following explosive population growth in Texas, particularly among Hispanic residents, the state gained four seats in Congress that cycle. Rather than creating a district with a Black and Hispanic majority that could’ve made their seats safer in a Democratic wave election, Republicans opted for keeping their numbers up in Dallas County and purposefully diluted the voting strength of voters of color in the Texas House map and in several congressional districts. This sparked temporary and replacement maps that were also found discriminatory in some ways.

Since state Republicans held onto their 20-year majority in the recent election, they’re positioned to further entrench their power. But voting rights groups will likely raise concerns that the cost of that retrenchment will be the continued disenfranchisement of voters of color.

How this year will be different

In every decade since the federal Voting Rights Act was passed, federal courts have found that Texas lawmakers disenfranchised voters in one way or another when drawing maps. Because of this long history of voter suppression, Texas was required for decades to run any changes to its elections, including changes to district boundaries, by the U.S. Department of Justice or a federal court.

But in 2013, the Supreme Court gutted the Voting Rights Act and ruled that the formula that kept states like Texas under federal oversight was outdated, freeing the state from the process known as preclearance. That means the 2021 redistricting cycle may mark the first time in nearly 50 years that Texas will be able to implement new legislative and congressional districts without having to prove ahead of time that the maps don’t undermine the electoral power of voters of color.

Allison Riggs, who argued the Texas redistricting case in the U.S. Supreme Court, said the absence of federal preclearance is deeply concerning.

"The presence of Section 5, the requirement that Texas receive preclearance before enacting new redistricting plans, is pretty much the only reason the initially enacted 2011 maps haven’t been in effect all decade," said Riggs, interim executive director of the Southern Coalition for Social Justice. "It’s really hard to imagine what an unchecked Texas Legislature could do. We were hoping bail-in could provide a stock gap until the day we hoped Congress addresses and creates a new coverage formula, but I’m deeply worried. I don’t see indicators that the Texas Legislature has learned its lesson, that it understands what it did in 2011, and quite frankly, perpetuated in 2013. I see no understanding of the ways in which that was wrong and hurt voters of color."

There are also questions about when redistricting will take place due to census data concerns. The pandemic, and legal battles with President Donald Trump’s administration, delayed the U.S. census deadline. Census officials have said the department is working to get the 2020 census data to states by the statutory deadline of April 1. As the Legislature navigates an unprecedented session, it will have to figure out how to safely hold public input hearings, work together to create new maps, and carry out redistricting with no guarantee of when census data will arrive.