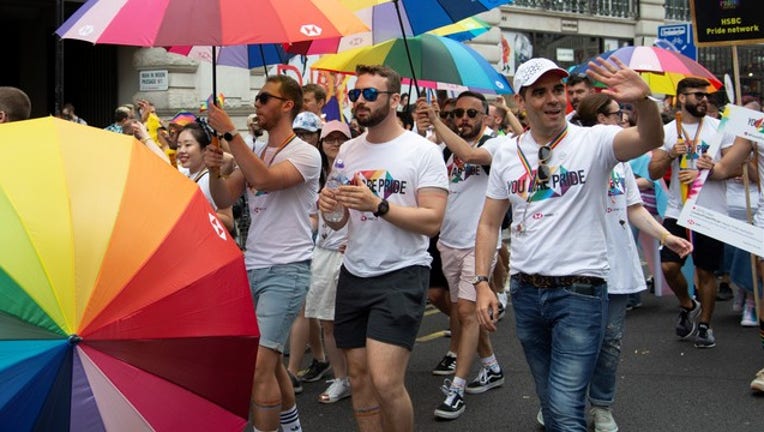 This year's events in London, Madrid and Budapest mark the 50th anniversary of the Stonewall Inn uprising in New York against police persecution, a turning point in the modern gay rights movement.

The Spanish capital's parade, one of the largest in the world, also became on Saturday the stage for the bursting of political tensions when police had to escort home center-right politicians out of the parade after LGTBQ activists blocked them from continuing half-way into the course.

The protesters, some of them hurling water bottles at the politicians, expressed anger over the center-right Citizens party's close ties to Vox, an uber-conservative party that has recently made inroads in Spanish politics and that activists perceive as an instigator of homophobia.

Vox officials, whose votes were key last month in electing a new conservative Madrid mayor also supported by Citizens, have proposed moving next year's pride parade out of the city center, while regional leader Rocío Monasterio has said the celebrations "denigrate people's dignity" and include "explicit sexual acts in the streets."

"When a mother, a father step outside with children from their home, they don't have to be exposed to that spectacle," Monasterio told a conservative website last week.

Citizens had defended its right to join the pride celebrations despite refusing to sign the march's manifesto, which called on political parties not to support anti-LGBTQ policies by the far-right.

Beatriz Gimeno, a long-time LGBTQ activist and far-left Podemos (We Can) party lawmaker, told The Associated Press that "reactionary" remarks by the far-right were a reminder of how relevant the battle for gay rights remains.

"Faced with attitudes that take us 20 or 30 years back, we need to tell them that we'll take not even one step back," Gimeno said.

Despite the brief confrontation between politicians and activists, Saturday's parade was attended by hundreds of thousands in a largely festive mood.

The official march preceding the parade called for better care for elder LGBTQ people and a nation-wide law that, among other long-running demands, would standardize rights for transgender people across the country.

"Elders without closets," read a street-long white banner carried by protesters marching along Madrid's main artery. Members of the first generation of Spanish gay rights activists were at the front, followed by the colorful parade of floats decorated profusely with rainbow flags.

Arny Carrasco, a 67-year-old man from a small town, said he had missed few pride celebrations for the past two decades, but that Saturday's felt "special" for its focus on the elderly.

"The gay community has shown society different ways of relating to each other and it's about time that we don't feel that we need to get back into the closet when we become older," Carrasco said, citing how nursing homes, for example, are ill-prepared to cater the needs of LGBTQ people, especially transgender men and women.

In London, hundreds of thousands also poured into the streets of London for Britain's biggest pride parade. Some 30,000 participants, including uniformed police and firefighters, marched while many more lining the streets cheered and waved rainbow flags.

Organizers said they had aimed to increase the event's diversity, and London Mayor Sadiq Khan said he hoped it would be the biggest-ever Pride parade.

Alison Camps, co-chair of Pride in London, said "it's vital that we remember that Pride is not just one day a year - we must fight for the rights of all members of our community all year round."

In the Hungarian capital, Budapest, thousands also took part in a pride parade that stressed calls for acceptance and the right to live without fear.