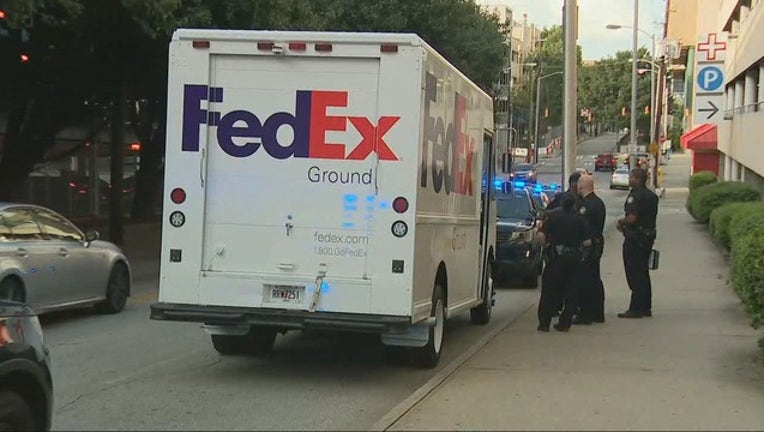 ATLANTA (FOX 5 Atlanta) - A FedEx truck driver stepped in to help three people get to the emergency room, police said, after a shooting in northeast Atlanta.

The shooting happened around 6 p.m. Monday. Police said the FedEx driver was flagged down by the victims in the 1500 block of Hardee Street NE. Police said the driver made the special 4-mile delivery to Grady Memorial Hospital’s emergency room.

“I drove to the hospital and I was on the phone with 911 at the same time, I was basically just surfing through traffic,” the truck driver told FOX 5 News.

The FedEx driver, who didn’t want to be identified, told FOX 5 News he was in the Edgwood area, wrapping up his deliveries for the day when he was approached by three people who had been shot.

“The first dude said, call 911,” said the driver. “The other two said just drive to the hospital.”

A fourth gunshot-wound victim arrived at the same hospital in a car, police said.

Police surrounded the area around Grady Memorial Hospital, securing the scene and investigating where the actual shooting took place.

The names of the shooting victims were not immediately available, but police said all were alert, conscious and breathing when they began treatment at the hospital and are expected to recover.

“At this point, we believe it’s a drug transaction gone wrong, that’s what we have learned,” said Atlanta Police Officer Tasheena Brown.

It’s still unclear whether these victims are also involved or if there are other suspects. The truck driver said, he didn’t ask a lot of questions, but he never felt threatened, he just knew they needed help.

“He was just being a good citizen,” said Officer Brown. “Escorting those people to the hospital that were in need of help.”

“I knew I had to get them to the hospital, I was really panicking,” said the driver.

The name of the FedEx driver was not released, but FedEx did issue a statement late Monday evening which reads:

“First and foremost, our thoughts remain focused on the well-being of those involved in this incident. FedEx Ground commends the quick action taken by this service provider employee and is proud of the many contributions that our team members and vendors make to our communities every day.”

The shooting remains under investigation. No charges were filed Monday.