The Jacksboro community in Jack County spent much of the day cleaning up after a powerful EF-3 tornado destroyed several homes and heavily damaged the high school and elementary school.

DALLAS - At least 10 tornadoes ripped through North Texas Monday afternoon, leaving trails of destruction, dozens of injuries and at least one person dead.

The National Weather Service of Fort Worth spent Tuesday surveying the damage from Monday’s severe weather. They determined the following:

At least 10 tornadoes ripped through North Texas Monday afternoon, leaving trails of destruction, dozens of injuries and at least one person dead.

The NWS is still surveying damage and will likely confirm more tornadoes.

Over in Grayson County, officials confirm a 73-year-old woman was killed in Sherman in an EF-2 tornado. More than 100 buildings were damaged there, and at least 11 people were taken to the hospital with injuries.

There is still a lot to clean up in Jacksboro after an EF-3 tornado destroyed at least 90 homes in Jack County. Officials are still working to assess the full damage, including businesses and other structures.

The Jacksboro community in Jack County spent much of the day cleaning up after a powerful EF-3 tornado destroyed several homes and heavily damaged the high school and elementary school.

The principals at both schools and parents waiting at pickup lines Monday helped rush students into protected hallways moments before the tornado struck.

Jacksboro Police Chief Scott Haynes got emotional when he thought about how close parents and students were to be seriously hurt or worse.

"You see the damage here. We're in the direct path, the major area where we received damaged. And it's just a miracle," he said fighting back tears. 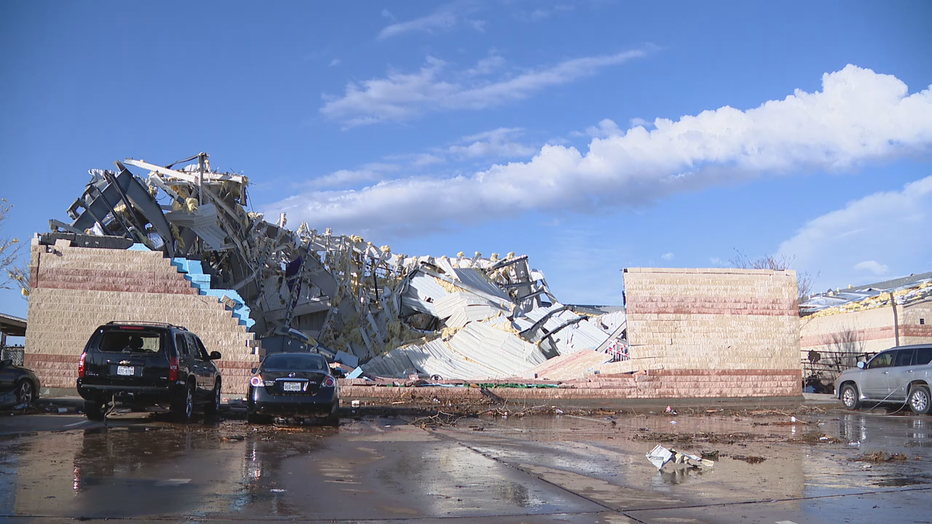 A bunch of twisted metal is all that’s left of the playground belonging to the damaged elementary school.

"My two kids and my husband are ok. The kids at JISD are okay," she said. "I think that there is a lot to be thankful even though this is so sad."

Sanders’ family spent the afternoon packing up to move into a friend’s house.

Classes for Jacksboro ISD have been canceled for the rest of the week.

Behind the school, a neighborhood was gutted. Residents say it was lightning and thundering nonstop prior to the tornado. Twenty-seconds later, their lives were forever changed.

Russ Ray barely made it into the bathroom of his Jacksboro home Monday afternoon when the EF-3 tornado tore through his neighborhood.

"Didn’t even make it to the shower when everything just blew off. I felt all the insulation come down on me," he recalled. "I opened up my eyes, and we’re all covered in this yucky stuff. The roof is gone, and the rain hit."

The rain soaked all of Ray’s belongings inside.

Take a walk down the street just blocks from the damaged elementary school, and it’s clear his neighbors faced a similar fate.

"All of a sudden, the rain was going sideways. And I seen my hot tub blowing away, hopscotching across my yard," recalled Randy Jackson. "I said, ‘Mom, we better get in the hallways. This is gonna be a tough one.’"

Jackson's home is intact, but David Harmonson wasn't so lucky.

"The adrenaline was moving. We were just in survival mode yesterday. Today is when the reality sets in," he said.

That reality is finding a place to stay. His home was destroyed. Harmonson and his son spent the day moving out what little was left to salvage.

Video from Sky 4 shows some of the damage from a suspected tornado in Jacksboro, about 60 miles northwest of Fort Worth. The damage to homes, schools and businesses is extensive and widespread. Thankfully, no one was killed.

Down the street, 18-year-old Christian Mott was hard at work cleaning up his grandmother's house.

"They were terrified. They were inside when it hit," he said. "They ran into a pantry door and tried to hide into it. Thank God they were safe."

Mott’s grandparents emerged stunned to find their windows blown out. Some of their neighbor's stuff was inside their home. A flipped-over car barely missed the house.

"This was my aunt’s car. She was here at the time," Mott said. "She parked it. It picked it up and put it in the yard."

Clean-up in the devastated neighborhood has become a family affair. Relatives of all ages showed up to help loved ones and strangers pick up the pieces.

"They all showed up. I got these junior high school kids here helping out and some people I didn’t even know," Ray said.

Kenneth Dunn is still trying to comprehend how he's alive. His roof is open to the sky. The only part still covered is the laundry room, where he, his wife, his handicapped mother-in-law and his 18-year-old son took shelter.

"I hovered over them in case anything came down. I would be on top of them," he said.

Dunn acted as a human shield as the EF-3 tornado ripped through his neighborhood. He said it's difficult to take in the next step.

"When it’s gone, it may hit me even harder. Something new will be here," he said.

People prefer to think of themselves as survivors rather than victims since they were able to walk away from a terrifying twister.

Dozens of electrical crews from across the state and beyond are helping restore power.

Jack County officials say four people had to be rescued from their homes and nine people were taken to the hospital with injuries. However, there were no deaths reported.

The woman killed Monday night was home alone in Sherwood Shores along the Red River in Grayson County. The family of the 73-year-old woman released her identity. The EF-2 tornado also injured 11 people. Winds maxed out at 130 miles per hour.

The woman killed Monday night was home alone in Sherwood Shores along the Red River in Grayson County.

The family of the 73-year-old woman released her identity. The EF-2 tornado also injured 11 people. Winds maxed out at 130 miles per hour.

Viranda Rodgers’ family says she hid in her bathroom as that tornado came through her neighborhood. The only part of her home that was spared by the tornado was her porch. She was killed in the storm.

Regena Wicker and other family members and loved ones went through what was left of her aunt’s house on Tuesday.

"You can’t replace pictures. You can replace almost anything else," she said.

Pictures of the Rodgers and pie plates are just a few of the cherished items found.

Rodgers’ family says she lived in her home with her husband, but he wasn’t there. He was in the hospital for an unrelated treatment. She hid in her bathroom.

Nearby, Stan Byers, his wife and sister-in-law were all in their home when the tornado struck.

"Lights went out, and everything went crazy," he recalled.

Byers’ home flipped over on its roof. His wife broke two bones in her back, and their dog was killed.

People in the community did what they always do in times like this by helping their neighbors.

As power crews worked to put up new lines and cut trees, others were helping families salvage what was left from the damage.

For dozens of families, they are without a home or vehicle.

"Just a miracle," Byers said. "God was looking out for us."

And for Rodgers’ family, they will find comfort in remembering the good memories they shared.

"She was the rock," Wicker said. "We always played a game called zonk or dominos, cooking pies. She loved to cook. She hated to lose playing games."

The Red Cross has a shelter at a church in Whitesboro, which is about 20 minutes south of Sherwood Shores.

There is no word on when all power will be restored in the area.

Incredible video out of Bowie, about 70 miles northwest of Fort Worth, was captured by a home camera right as one of two tornadoes smashed through this home.

At least four people had to be rescued from homes after two EF-1 tornadoes hit the town's east city and southeast side with winds up to 100 miles an hour.

Incredible video out of Bowie, about 70 miles northwest of Fort Worth, was captured by a home camera right as one of two tornadoes smashed through this home.

Officials are still working to get a full assessment of damage out there, but about a dozen homes were destroyed.

Many living in Bowie are grateful for taking shelter during Monday’s tornadoes.

John Lindsey was able to get to a shelter. However, he says his father-in-law is sometimes a bit stubborn.

"He didn’t go to the shelter like we asked him to," he said.

Lindsey’s 90-year old father-in-law was inside his home as a tornado hit.

"And it flipped him over the table," he said.

The 90-year-old man has lived at him home for more than half a century. That home is now destroyed. Somehow, he was safe.

"He finally did answer, and the first thing he said was everything was gone," Lindsey said.

The NWS says there were two EF-1 tornadoes in the Bowie area Monday. Emergency management officials say about a dozen homes were destroyed.

Five people were hurt, but no deaths were reported.

RELATED: 4 rescued from homes in Bowie after two EF-1 tornadoes

Video from one garage was recording as a tornado blasted through homes.

Larry Dodd says he tried to get his 81-year-old father into their storm shelter, but he doesn’t move well. They didn’t have time, so they hid in a bathroom.

"After I got him in there, I closed the door. But I could feel the wind trying to push the door behind me open," Dodd recalled. "So I just kind of leaned back like that."

The damage brought people like Wes Stell out to help.

"I’m out here to help my friends and neighbors," he said. "It hurts to see it like this, but it’s nice to see everybody coming out and chipping in and helping out."

Stell is not asking for money. It’s just a way to give back.

"There are houses that have been completely demolished," he said.

Unfortunately, Lindsey’s father-in-law’s home is one of them. But he’s most thankful he’s alive.

Bowie Emergency Management says in total five people were hurt, but the worst injury was a shoulder injury.

The town’s community center has been opened as an emergency shelter for those affected.

Families in Central Texas are waking up and assessing the damage left behind after tornadoes touched down in several areas. One of the hardest-hit places was Round Rock in Williamson County where many homes and businesses were significantly damaged by the storm.