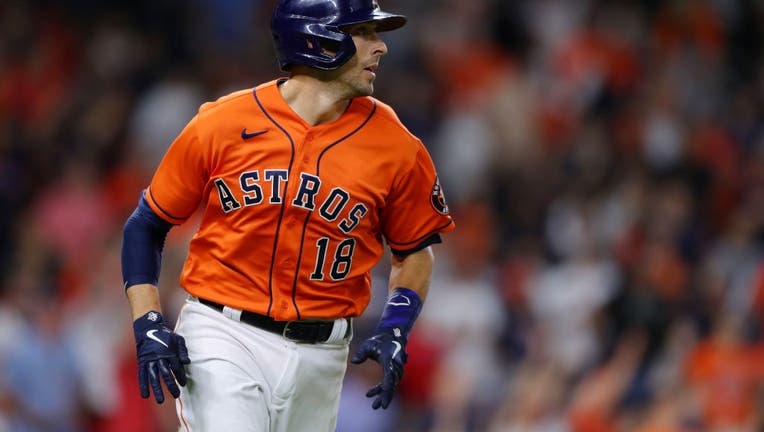 HOUSTON, TX - OCTOBER 16: Jason Castro #18 of the Houston Astros hits a solo home run in the ninth inning during Game 2 of the ALCS between the Boston Red Sox and the Houston Astros at Minute Maid Park on Saturday, October 16, 2021 in Houston, Texas.

He was replaced by Garrett Stubbs.

Castro was placed on the COVID-19 related injured list. Unlike a player replaced due to injury, Castro is eligible to return if he is cleared.

Castro, 34, was 0 for 2 in Game 1 against Atlanta and 0 for 1 in Game 2. He hit a go-ahead single in the ninth inning off Boston’s Nathan Eovaldi to help the Astros win Game 4 of the AL Championship Series.

Castro is a member of the players’ association’s eight-man executive subcommittee supervising collective bargaining with MLB.

Stubbs hit .176 in 34 at-bats during the regular season. He has not appeared in a big league game since Sept. 16 and last played at any level on Sept. 30 for the Triple-A Sugar Land Skeeters.