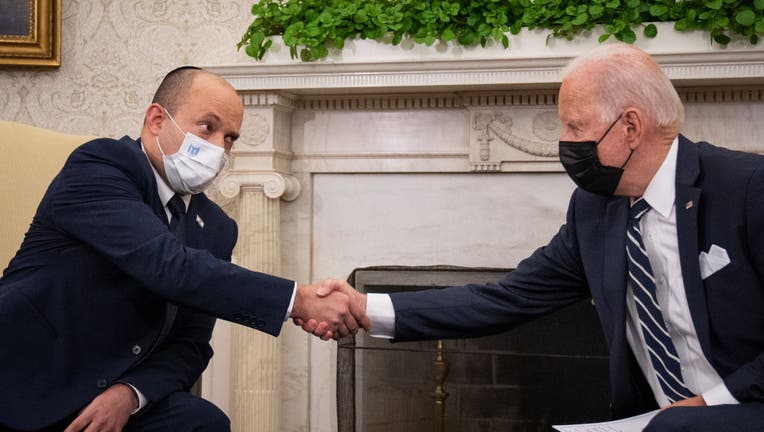 WASHINGTON, DC - AUGUST 27: U.S. President Joe Biden meets with Israeli Prime Minister Naftali Bennett in the Oval Office at the White House on August 27, 2021 in Washington, DC. During their first face-to-face meeting at the White House, US Presiden

In a phone call with the president, Naftali Bennett told Biden that "the world is now a safer place thanks to the courageous operation of the U.S. forces," his office said.

Bennett and Biden also discussed Iranian military activity across the Middle East and efforts to block Iran’s nuclear program, it said. The White House said in a statement that the leaders discussed "the threat posed by Iran and its proxies."

Israel and Iran are arch-enemies, and Israel has raised vocal concerns about U.S.-led efforts to revive the 2015 international nuclear deal between Iran and world powers.

The deal unraveled after President Donald Trump withdrew from it in 2018. Israel objected to the initial deal and believes any attempts to restore it will not include sufficient safeguards to prevent Iran from developing a nuclear weapons capability. Israel also says any deal should address Iranian military activity across the region as well as its development of long-range missiles capable of striking Israel.

Biden, according to the White House, also reiterated his "full support for replenishing Israel’s Iron Dome" defense system. The system designed to intercept and destroy short-range rockets is in need of restocking after last year’s 11-day war with Hamas in Gaza.

The two leaders also discussed concerns at the Ukraine-Russia border, where Biden administration officials on Sunday warned anew that further Russian invasion could come soon, though they remain hopeful the Russians will still de-escalate through diplomatic means.

Earlier Sunday, Bennett said Israel is closely watching world powers’ negotiations with Iran in Vienna, but reiterated his position that Israel is not bound by any agreement reached by them. Israel has repeatedly threatened to strike Iran if it believes it is necessary to halt the country’s nuclear program. Iran says its nuclear program is for peaceful purposes only.

"Anyone who thinks such an agreement will increase stability is wrong," Bennett told his Cabinet early Sunday. "Israel reserves its right to act in any case, with or without an agreement."

The White House said Biden told Bennett that he planned to visit Israel later this year.