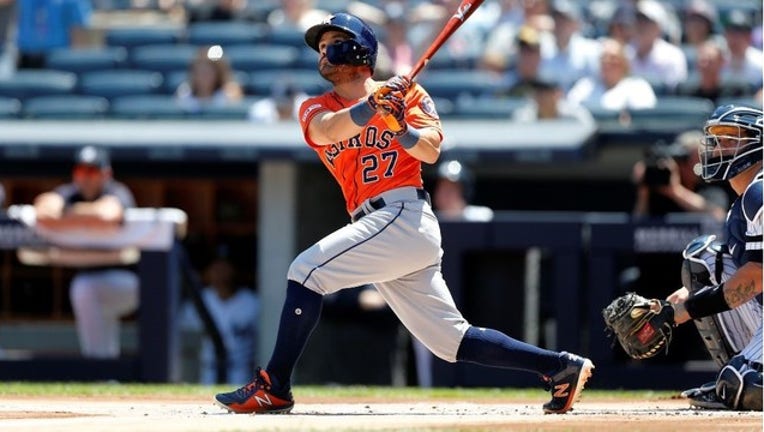 NEW YORK (AP) - Three pitches in, Jose Altuve gave the Astros a much-needed lead. By the time rookie Yordan Alvarez connected innings later, relief was settling in for a club coming off a most miserable week.

"We needed a win in the worst way, just the way the week has gone and the first at-bat we have a 1-0 lead," manager AJ Hinch said. "It just kind of woke the dugout up, and we got a really good day started."

New York had won eight straight but was stopped by ace Justin Verlander and a quartet of homers, including a grand slam from Tyler White.

"We showed our mettle today," Verlander said. "It would have been easy to look forward to the off day tomorrow and say this was a tough road trip and let's reset, but that's what good teams do."

DJ LeMahieu hit a three-run drive in the fifth, giving New York a home run in a franchise-record 26 consecutive games. The major league mark is 27, set by the 2002 Texas Rangers.

Altuve reached the second deck in left field off J.A. Happ (7-4) as Houston snapped its first seven-game skid since 2015. It was Altuve's 12th career leadoff homer and marked the first time Houston scored in the opening inning since June 14 against Toronto.

White hit his first career slam in the fourth, and Alvarez reached the second deck in right field in the fifth with a two-run drive that knocked out Happ.

Alvarez tied a big league record with his seventh homer in 12 games to begin his career. He's the first player with at least seven homers and 16 RBIs through a dozen games, according to the Elias Sports Bureau.

"We heard a lot of really good things about him," Altuve said. "But it's one thing is that and another thing is watching him play and execute every swing and how good he is. He has a bright future and he's going to be a big part of this team."

Yuli Gurriel added a solo shot off Luis Cessa for Houston, which rebounded nicely from blowing a late lead Saturday.

Houston scored its other run on a single by Michael Brantley in the second that made it 2-0.

Verlander (10-3) became the third 10-game winner in the AL, allowing three runs and four hits over seven innings. He struck out nine, walked two and completed seven innings for the 11th time this year, the most in the majors.

Including two starts in the 2017 ALCS, the seven-time All-Star is 4-0 in six starts against the Yankees since joining the Astros.

"When you miss a little bit, or like today, if you don't have some kind of secondary to keep them off-balance, those fly balls can hurt you when you make a mistake," Yankees manager Aaron Boone said.

The Yankees held their 73rd annual Old-Timers' Day, and Hall of Fame closer Mariano Rivera was the star. He hit an inside-the-park home run, made a catch in center field and closed out the four-inning exhibition by retiring Luis Sojo via groundout. Rivera will be inducted in Cooperstown next month as baseball's first unanimous selection.

Astros: OF George Springer (strained left hamstring) had a hit and three walks for Double-A Corpus Christi on Saturday while playing center and right field. He was set to DH on Sunday and is expected to rejoin the big league team Tuesday.

Yankees: OF Cameron Maybin was placed on the injured list with a Grade 2 strain in his left calf, which is expected to sideline him for over a month and possibly longer. ... RHP Ben Heller, who is recovering from right elbow surgery, began a rehab assignment with Class A Tampa.