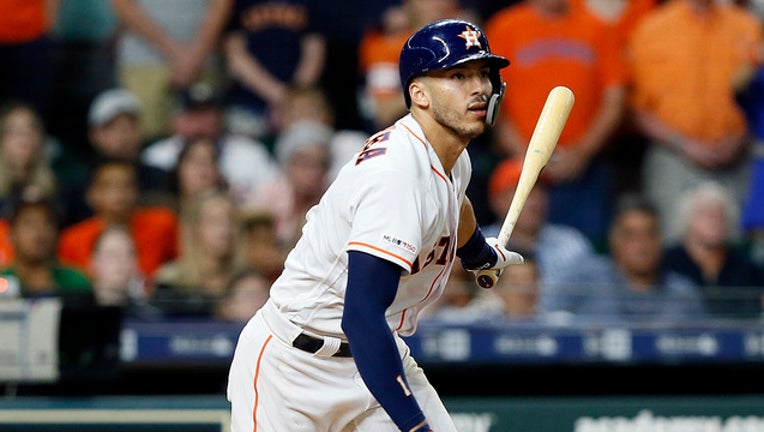 Carlos Correa #1 of the Houston Astros hits a walk off single in the ninth inning against the Boston Red Sox at Minute Maid Park on May 25, 2019 in Houston, Texas. (Photo by Bob Levey/Getty Images)

Houston Astros shortstop Carlos Correa has been placed on the 10-day Injured List due to a fractured rib and is expected to be out of action for approximately four to six weeks, the teams says.

The Houston Astros released this statement on Wednesday:

All-Star shortstop Carlos Correa has been placed on the 10-day Injured List due to a fractured rib, Astros President of Baseball Operations and General Manager Jeff Luhnow announced today.

The injury will keep Correa out of action for approximately 4-6 weeks.

Luhnow also announced that IF/OF Myles Straw has been recalled from Triple A Round Rock and is scheduled to join the big club today.  Straw hit .289 (55x190) in 46 games for the Express with a club-best 16 steals in 18 attempts. Defensively, Straw has appeared in 25 games at shortstop and 23 games in centerfield. This will be Straw’s second Major League stint as he appeared in nine games in 2018 as a September call-up (.333, 3x9).

Correa, who last played on Sunday vs. Boston, has been one of the top shortstops in the American League this season, ranking second at the position in OPS (.907), HR (11) and RBI (35) and third in slugging pct. (.547). He also ranks second among AL shortstops in fielding pct. (.988), committing just two errors in 173 total chances.