An incident sparked by an "Abolish ICE" bumper sticker led to the arrest of an Oregon woman. (Credit: Alyssa Cuellar via Storyful)

ASTORIA, Ore. - An Aug. 8 incident in the parking lot of an Oregon Safeway allegedly sparked by an "Abolish ICE" bumper sticker led to the arrest of a 57-year-old woman.

According to the Astoria Police Department, a man parked near Alyssa Cuellar’s car took issue with her bumper sticker. She stood outside a Safeway store and recorded him in a video that has since been posted to social media.

Police said Moe Darling Mcleod, 57, walked out of the store shortly after and confronted Cuellar, who told the suspect she was just making sure the man didn’t damage her car.

But McCleod said the man was her husband, a Marine, and claimed he would not touch the vehicle. When Cuellar insists she’s allowed to watch her car, the confrontation escalated to profanity and violence.

The suspect appears to smack Cuellar’s phone of her hand while a scuffle ensued.

"Get away from me," Cuellar shouted. 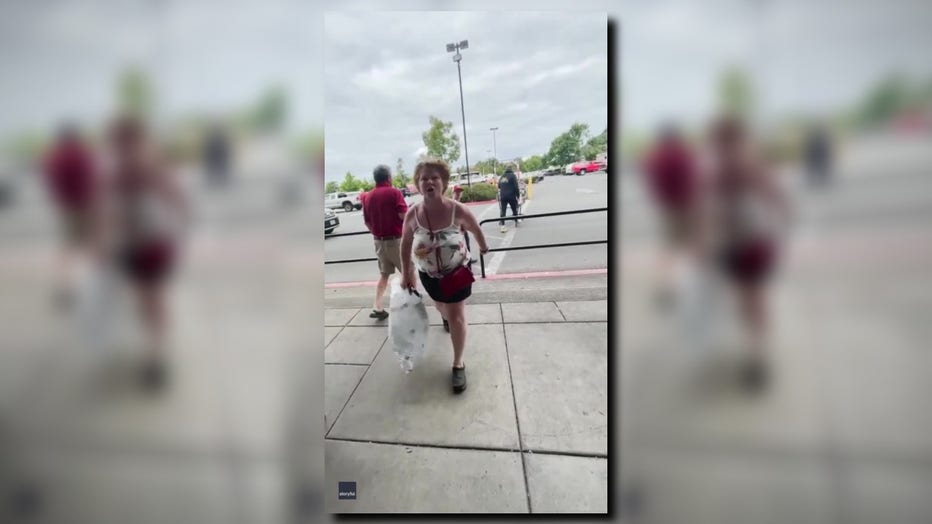 An incident sparked by an "Abolish ICE" bumper sticker led to the arrest of an Oregon woman. (Credit: Alyssa Cuellar via Storyful)

A tearful Cuellar made her way to the car and called the police. Officers responded to the scene in minutes.

One officer talked to the Cuellar while another one stopped the suspect a block away from the store. Neither party was arrested initially, but after reviewing more evidence, police took Mcleod into custody on Aug. 11.

She’s charged with felony assault, disorderly conduct and criminal mischief, according to authorities.

"The Astoria Police Department recognizes that the video released is very disturbing," police said in a news release. "We thank those members of the public who have reached out with concern for the victim and with calls that justice be served. Following the arrest, all reports and evidence will be forwarded to the Clatsop County District Attorney’s Office for review and prosecution."