LOS ANGELES - Calling all LEGO enthusiasts and builders: “LEGO Masters” is now accepting casting applications after the popular building competition was renewed for a second season.

Actor Will Arnett will be reprising his role as host and producer of the show.“I’m looking forward to getting back to the fun with this next block of shows,” said Arnett. “To say that these LEGO puns write themselves takes away from the work I’ve done over the last two and a half minutes.”

Several two-person teams will compete to impress the judges with even bigger, more elaborate builds until the finale, during which the top teams will face off for a “life-changing grand prize.” 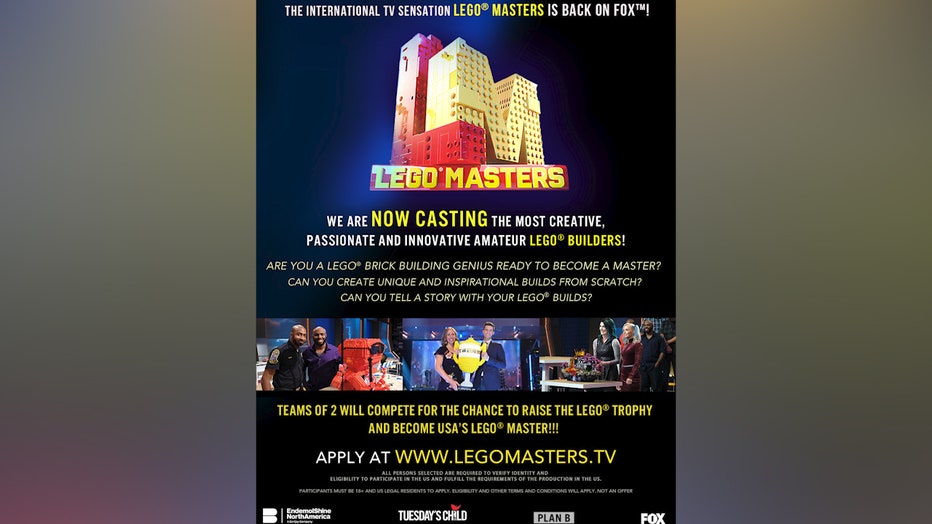 RELATED: ‘LEGO Masters’ returning to FOX for a 2nd season in 2021

Applicants can submit applications to appear on the competition show by visiting Legomasters.tv.

Here’s what you need to know before applying:

If selected, competitors must have a seven-week period between February-April 2021 free to film the show, which will be taking place in Atlanta, Georgia.

Travel and lodging accommodations will be provided.

“LEGO MASTERS raised the bar for all competition series, wowing fans with its wildly creative builds,” said Rob Wade, president of alternative entertainment and specials for FOX Entertainment. “Add to that our insanely dynamic host, Will Arnett, and it’s just a great hour of family-friendly fun. We can’t wait to see this new batch of LEGO contestants attempt to master Season Two’s even bigger and better challenges, brick by brick.”

Also noteworthy were the charitable efforts that went on behind the scenes of the show to help veterans during the COVID-19 pandemic.

LEGOs are enjoyed by people in all walks of life, so Arnett partnered with the nonprofit Merging Vets and Players (MVP), a charity founded in 2015 by FOX Sports NFL insider Jay Glazer and former Green Beret and Seattle Seahawk Nate Boyer, and gifted hundreds of LEGOs to veterans.

The goal was to “spark creativity” and bring “joy during a challenging time.”

Season 2 of “LEGO Masters” will premiere in 2021, but be sure to check out the first season on FOX Entertainment’s streaming platform, Tubi.