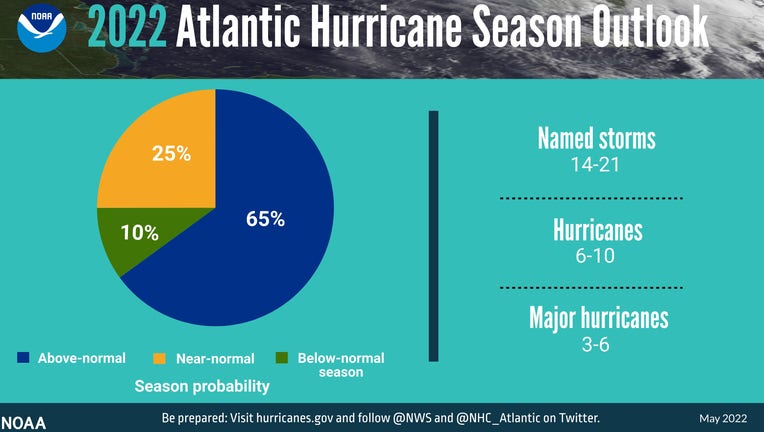 A little more than a week away from the start of the Atlantic hurricane season, the National Oceanic and Atmospheric Administration released its outlook for the 2022 season, predicting an above-average number of named storms.

FOX Weather senior executive producer of weather presentation and meteorologist Mike Rawlins explains the increased activity this season is tied to the ongoing La Niña that will continue through the hurricane season.

Warmer-than-average sea surface temperatures in the Atlantic and the Caribbean Sea, as well as an enhanced west African monsoon also factored into the NOAA prediction.

"The forecast bottom line is that there are increasing odds that we are going to see a much busier than average season," Rawlins said.

FOX Weather meteorologist Ian Oliver said the outlook is a reminder to prepare because it's too early to tell where storms will make landfall.

"Although this outlook suggests a lot of tropical activity, seasonal outlooks don't forecast where these storms could eventually strike or how many landfalls could occur," Oliver said. "Preparing for potential tropical impacts now (including getting your supplies and your plan in place) can prevent a lot of stress later. We'll keep you updated on anything brewing in the tropics all season on FOX Weather."

NOAA and FEMA leaders revealed the forecast at the New York City Emergency Management Department during a news conference on Tuesday.

Rewatch the NOAA announcement below:

While it might be easy to get stuck on the numbers, FOX Weather Meteorologist Jason Frazer said seasonal hurricane forecasts are a reminder that it takes only one storm to wreak havoc on a community.

"You should know which evacuation zone you are in, where will you go if you’re forced to evacuate and have a backup plan in case you can’t execute your primary plan," Frazer said. "Review your insurance policy to ensure you’re covered for damage caused by wind and flooding. Also, use this opportunity to take a photo or video of all of your belongings and email it to yourself. This ensures that even if your phone is damaged, you have a way of verifying what belongs to you."

THE HISTORY OF THE CSU ATLANTIC HURRICANE FORECAST

Below is a look at the National Hurricane Center and CSU outlooks compared to last season and the 30-year average. 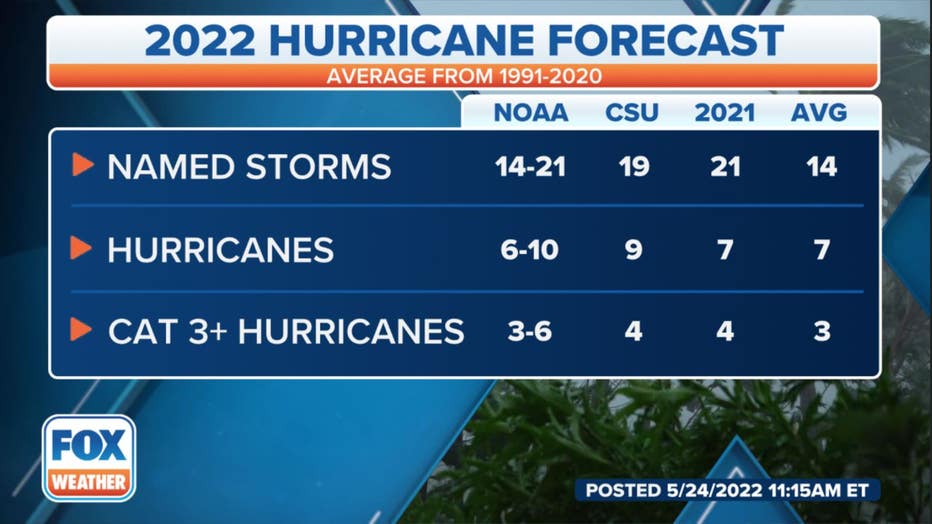 The 2021 Atlantic hurricane season was the third most active on record, producing 21 named storms and seven hurricanes, four of which became Category 3 or stronger.

Ahead of the official start of the Atlantic hurricane season, the NHC denoted its first area of interest last weekend for a disorganized cluster of thunderstorms in the Gulf of Mexico. However, the system dubbed Invest 90L fizzled out after moving inland over the southeastern U.S.

WHAT IS AN INVEST?

For those who live in states along the Gulf and east coast, and even further inland, hurricanes are part of life.

"It is our personal responsibility to understand the risk and protect our families as much as possible for the disruption they can cause," Freeze says. "It’s also important that we take action for our neighborhoods and communities to have procedures and systems in place to work together for recovery when necessary."

Every year since 2015, the Atlantic hurricane season has started early, with the NHC tracking one or more storms in the tropics at least a few weeks before the official start.

Most recently in this seven-year stretch of early starts, Tropical Storm Ana briefly roamed the central Atlantic Ocean last year between May 22 and 23. It developed east of Bermuda but quickly moved northeastward away from the archipelago and out to sea.

Ana briefly produced gale-force winds over portions of Bermuda, but no other impacts were reported on land from this short-lived storm.

According to the NHC, there is nothing currently being monitored in the Atlantic Basin, which includes the Atlantic Ocean, the Gulf of Mexico and the Caribbean Sea. 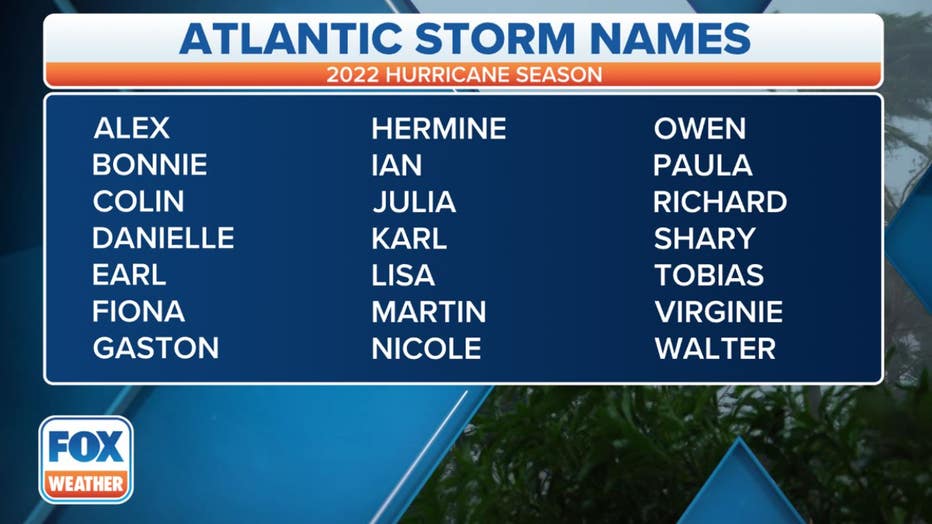 A table showing an alphabetical list of the 2022 Atlantic tropical cyclone names as selected by the World Meteorological Organization. The official Atlantic hurricane season runs from June 1 through Nov. 30. (FOX Weather)

NOAA will update its outlook again in early August, ahead of peak hurricane season.

This six-month period was chosen by the NHC because it accounts for 97% of all Atlantic tropical storms and hurricanes, according to NOAA’s Hurricane Research Division.

That means only 3% of Atlantic tropical cyclones occur outside those dates, with the majority of out-of-season activity occurring in May or December. However, there has been either an Atlantic tropical storm or hurricane in every month of the year, as can be seen in the graph below. 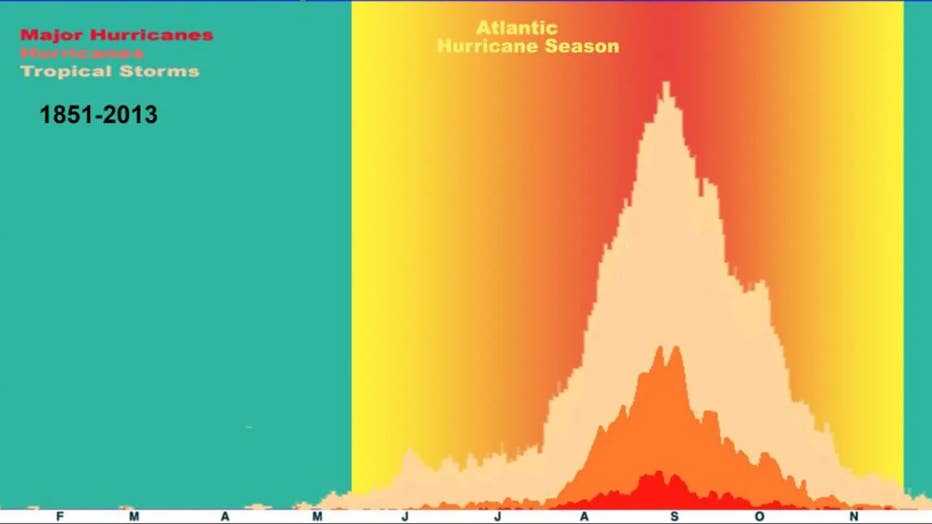 The Atlantic Basin shows a very peaked season from August through October, with 78% of the tropical storm days, 87% of the minor hurricane days and 96% of the major hurricane days occurring then. Maximum activity occurs in early to mid-September. "Ou

Read updates on the story at FOXWeather.com