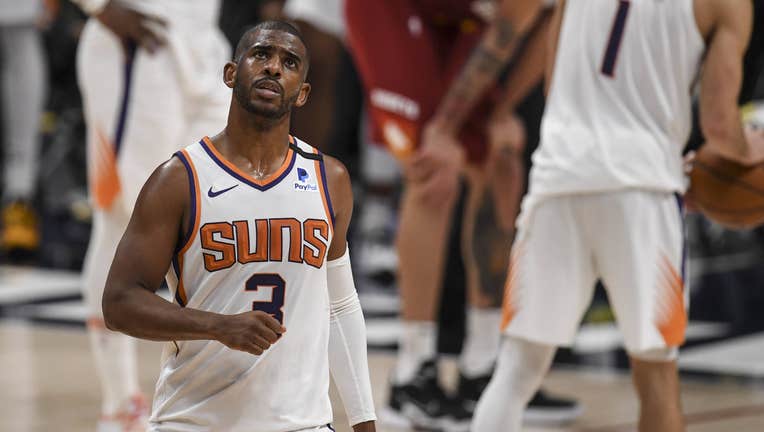 DENVER, CO - JUNE 13: Chris Paul (3) of the Phoenix Suns during the fourth quarter of Phoenix"u2019s series-clinching 125-118 win at Ball Arena on Sunday, June 13, 2021. The Phoenix Suns swept the Denver Nuggets 4-0 in their second round NBA Playoffs

PHOENIX - Phoenix Suns point guard Chris Paul will not be playing in Game 1 or Game 2 of the Western Conference Finals against the Los Angeles Clippers, according to the NBA.

The Suns released a short update Saturday that Paul is still in the league’s health and safety protocol after initially being placed on the list Wednesday. Suns coach Monty Williams said Paul’s situation was "day-to-day."

The 36-year-old point guard has been vaccinated against COVID-19, said a person with knowledge of the situation, speaking to The Associated Press on condition of anonymity because of privacy concerns. That may mean that Paul could be cleared to return more quickly than some who tested positive earlier this season before vaccines were readily available.

Now that Paul isn't available for the Suns', look for backup Cameron Payne to get a boost in playing time.

The 26-year-old Payne has already shown he can make big plays in the playoffs. Paul hurt his shoulder in Game 1 of the opening round against the Lakers, which severely limited his impact for a handful of games.

The 6-foot-1 Payne picked up the slack, averaging 12.5 points against the Lakers and shooting 41% from 3-point range.

The Athletic's Shams Charania first reported that Paul will be sidelined for "an indefinite period of time."

In March, the league also relaxed some of the protocols that were put into place last fall, doing so in response to players and coaches choosing to receive the vaccine that protects against the coronavirus.

But the league also cautioned at that time that "if an individual has symptoms consistent with COVID-19, the previous protocols apply" — which would still mean that anyone with those symptoms "may be subject to quarantine" regardless of their vaccination status.

Paul scored 37 points in Game 4 of the West semifinals against Denver, helping Phoenix finish off a four-game sweep. He has only played in the West finals once in his career, doing so in 2018 with Houston against Golden State. The Rockets held a 3-2 lead in that series when Paul injured a hamstring and had to miss Games 6 and 7; Houston lost both and the Warriors went on to win the NBA title.