"I just remember waking up. I was somehow under a car that was on the side of the road," said pedicab driver Daisy who asked that we not say her last name or show her face.

HOUSTON - A pedicab driver, who was one of three people seriously injured in a hit-and-run crash, recalled frightening moments as law enforcement continues its search for the driver.

The driver, who asked FOX 26 to identify her only as Daisy, says she picked up Gloria Fuentes and her friend at a Houston Astros game last Tuesday night.

Soon thereafter, her pedicab was hit from behind at the intersection of Austin and Capital in downtown Houston.

"In the video, you can see this person definitely had plenty of time to stop or realize, 'hey there's a pedicab in front of me,'" Daisy said. "I just remember waking up. I was somehow under a car that was on the side of the road."

The pedicab driver says some people passing by stopped to help but not the driver who rear-ended them.

"One of my passengers was face down unconscious," said Daisy. "I was really freaked out at that moment thinking the worst."

FOX 26 spoke to one of the passengers, Fuentes last Thursday, who had to lie down due to her injuries.

Gloria Fuentes and her family, along with the Houston Police Department are calling on the driver of the car that hit the pedicab to come forward.

"I have a broken nose a couple of stitches and a really bruised up tailbone," Daisy added.

She also said she can't understand how the driver could leave knowing people were on the ground injured.

"I'm sure you saw what you did why wouldn't you want to stop it's the human thing to do," Daisy said. 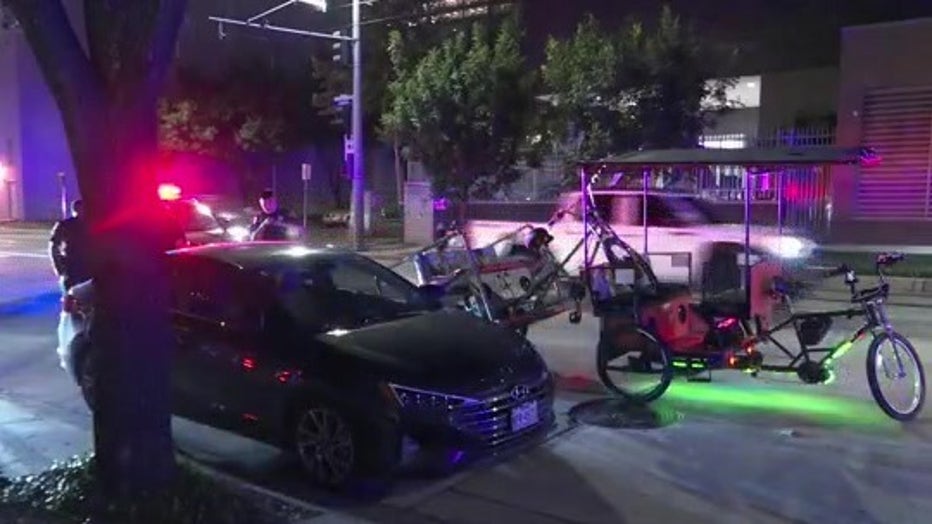