Operation North Star resulted in the arrests of "violent criminals, sex offenders, and self-identified gang members" wanted across 10 U.S. cities. The U.S. Marshals Service and other local agencies discussed the operation on July 7, 2022, in Chicago, Illinois.

CHICAGO - The U.S. Justice Department announced the capture of more than 1,500 fugitives who were wanted for "the most serious, violent, and harmful" crimes across 10 U.S. cities, including a significant number of suspects wanted for murders and shootings.

The 30-day operation focused on suspects wanted for dangerous offenses, including homicide, sexual assault, robbery, or aggravated assault, authorities said. Investigators prioritized suspects accused of using firearms in their crimes, or who had risk factors "associated with violence." 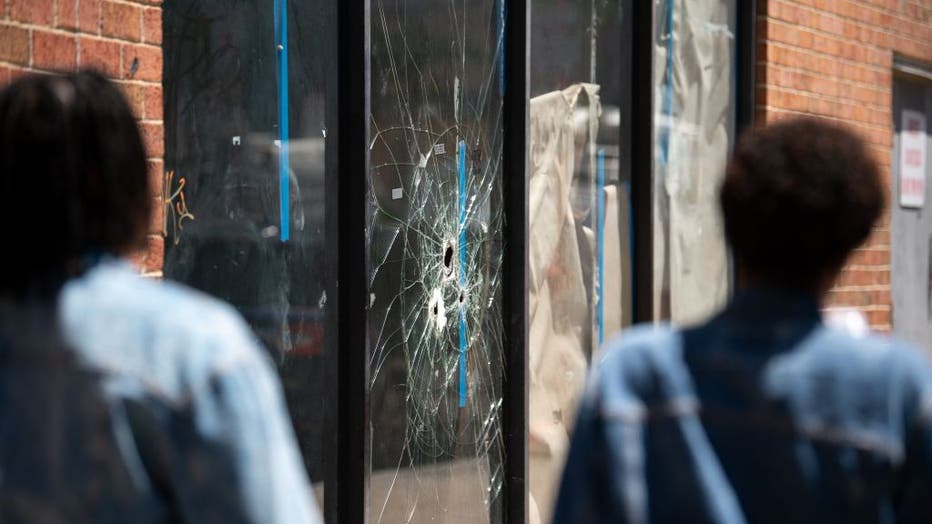 Pedestrians walk past bullet holes in the window of a storefront on South Street in Philadelphia, Pennsylvania, on June 5, 2022. Among the arrests in Operation North Star was a suspect wanted in connection to this shooting. (Photo by Kriston Jae Beth

The arrests were commended by U.S. Attorney General Merrick Garland, who noted how the Justice Department is "committed to doing everything we can to protect our communities from violent crime and end the plague of gun violence."

Among the arrests noted was 34-year-old Rashaan Vereen who was wanted on attempted homicide, aggravated assault, and firearms charges. Vereen was one of the suspects in a mass shooting incident on June 4 in Philadelphia in which three people were killed and 11 injured. Also arrested in connection with the shooting were Quran Garner, 18, and a 15-year-old suspect.

Rashaan Vereen, 34, and Quran Garner, 18, face charges in the deadly mass shooting on South Street. The District Attorney's Office has issued a murder warrant for an unnamed suspect.

This particular initiative, brought forth by the Justice Department, was different in that more resources, training, and personnel were allocated throughout the month of June, officials said.

"The task force is always at work, but this was an initiative in advance of some of the summer months where we see an increase in crime, particularly violent crime," LaDon Reynolds, the U.S. Marshal for the Northern District of Illinois, said during a press conference held Thursday in Chicago.

A total of 166 firearms were also seized during the month-long operation, as well as more than $53,600 and over 33 kilograms of illegal narcotics.

"Operation North Star was focused on areas where local law enforcement has seen a large number of homicides and shootings," U.S. Marshals Service Director Ronald Davis said in a statement. "By partnering with our local and state partners, we are able to hone in on the most dangerous criminals who cause the most harm."

RELATED: More than 150 violent fugitives arrested in the Houston area over 30 days