All about the US Mint and some lesser-known facts

The U.S. Mint, the government agency responsible for making coins, has had a long and storied history. Here's a look at what it does and some things you may not have known.

WASHINGTON - A new U.S. quarter featuring the late Maya Angelou officially went into circulation this week, making the American author, poet and Civil Rights activist the first Black woman to be featured on the 25 cent coin.

The new coin is part of the U.S. Mint’s American Woman Quarters Program, which began this year and will continue through 2025 — honoring various trailblazing women and their achievements in a variety of fields.

Angelou, who died in 2014 at the age of 86, rose to prominence with the publication of her groundbreaking 1969 autobiography, "I Know Why the Caged Bird Sings." She went on to publish more than 30 bestselling titles and was the recipient of more than 30 honorary degrees, the U.S. Mint said in a statement.

Angelou read "On the Pulse of Morning" at the 1992 inauguration of President Bill Clinton, marking the first time an African American woman wrote and presented a poem at the event. In 2010, she was honored with the Presidential Medal of Freedom — the highest civilian award in the U.S. — by President Barack Obama. She was also the 2013 recipient of the Literarian Award, an honorary National Book Award for contributions to the literary community. 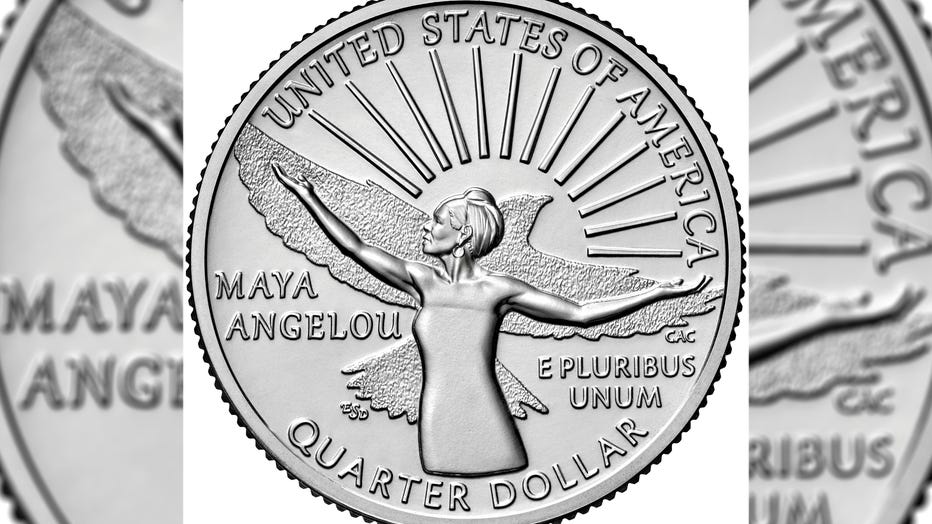 The now-circulating quarter honoring Maya Angelou is pictured in a provided image. The quarters are manufactured at the Mint facilities in Philadelphia and Denver. (Photo credit: U.S. Mint)

The new quarter depicts Angelou on the tails side with outstretched arms. Behind her are a bird in flight and a rising sun, "images inspired by her poetry and symbolic of the way she lived," the U.S. Mint said. It was designed by United States Mint Artistic Infusion Program (AIP) Artist Emily Damstra and sculpted by United States Mint Medallic Artist Craig A. Campbell.

The new circulating quarters honoring Angelou are manufactured at the Mint facilities in Philadelphia and Denver. The mint’s program, which was signed into law in January 2021, featuring additional honorees will begin shipping later this year and through 2025.

Other honorees in 2022 will be physicist and first woman astronaut Sally Ride, and Wilma Mankiller, the first female principal chief of the Cherokee Nation. Also honored this year will be Nina Otero-Warren, a leader in New Mexico’s suffrage movement and the first female superintendent of Santa Fe public schools, and Anna May Wong, the first Chinese American film star in Hollywood.

In 2015, Angelou was featured on a U.S. Postal Service limited edition "Forever" stamp. In early 2021, Barbie also debuted Angelou as a new addition to its "Inspiring Women" doll series.

Sen. Catherine Cortez Masto, D-NV, a sponsor of the legislation that created the American Woman Quarters Program, said Angelou’s coin "will ensure generations of Americans learn about Maya Angelou’s books and poetry that spoke to the lived experience of Black women."

"Maya Angelou’s writing and activism inspired countless Americans and her legacy helped fuel greater fairness and understanding across our nation," Masto said in a statement. "She is exactly the type of leader I had in mind when Senator Fischer, Representative Lee and I wrote our bipartisan legislation to create a series of quarters honoring the contributions of American women."