A former Super Bowl Champion has been down the road of recovery for years for kidney disease. He took his healing to a new level when he underwent bariatric surgery to lose weight through Baylor College of Medicine.

HOUSTON - Former NFL player Gaylon Hyder was known for his tough tackling skills on the field, but he quit football years ago to tackle his health problems.

"I was retaining water a lot. There were times I was getting fatigued a lot. I had I started having heart problems," says Gaylon.

Gaylon was diagnosed with a rare kidney disease called focal segmental glomerulosclerosis (FSGS) and had to dig deep, to keep playing the sport he loves.

"It completely changed football," explains Gaylon. "The whole time I practiced, especially during two-a-days in the summertime when we were practicing twice a day, I had to always have a doctor on the field almost to monitor everything that I was doing to make sure I was hydrated. Make sure I wasn't dizzy, or anything like that."

Gaylon never imagined early in his football career at Texas Christian University (TCU) that he'd have to undergo five years of dialysis.

"It was horrible, I hated it! It was worse than going through two-a-days in football because I had to wake up every morning and it would drain me. I still to this day, thank God that I don't have to do that anymore," says Gaylon. "That dialysis actually woke me up! I believe it kind of put me in a situation where I had to focus more on my health and my body and what I needed to do to improve."

The Super Bowl Champion was striving to get healthy for his loving family, when he got the beautiful gift of life.

"The donor part is a story in its own. It brings me to tears almost thinking about that transplant. That transplant was really life changing," says an emotional Gaylon. "Anybody who's willing to donate after something tragically happens to a person is a blessing from God. There's no other way to explain it."

Gaylon had a new lease on life after his kidney transplant, but as a former pro-football player, his 6-foot-5 frame had packed on extra pounds.

"In football, we're taught to eat a lot. I'm a defensive lineman. My playing weight was 333 pounds."

Gaylon says he ate a lot when he played football, but acknowledges that he also burned a lot of calories since he worked out a lot.

Off the field, his scale was tipping close to 380 pounds. He suffered from knee and back pain, high blood pressure, and sleep apnea. That's when he turned to a doctor with Baylor College of Medicine for help to lose weight.

"The surgery is probably one of the best decisions I made. Period. Health wise, I feel like a whole new person after surgery."

Gaylon's bariatric surgeon from BCM explains the process and how she performs it at St. Luke's.

"The gastric sleeve works by making the stomach smaller, so the natural stomach can expand to the size of a small football and so with the gastric sleeve, we staple along the outer part of the stomach to create a linear stomach that's the size and shape of a really skinny banana – that's the best way that I can describe it for patients," explains Dr. Georgia Holder-Haynes.

"We do it minimally invasively that means that we use very small incisions, about a centimeter in size. And we can use a camera to see inside of the abdomen and do the surgery very safely and successfully without having to you know actually cut the patient open."

That means less pain and a faster recovery after surgery. 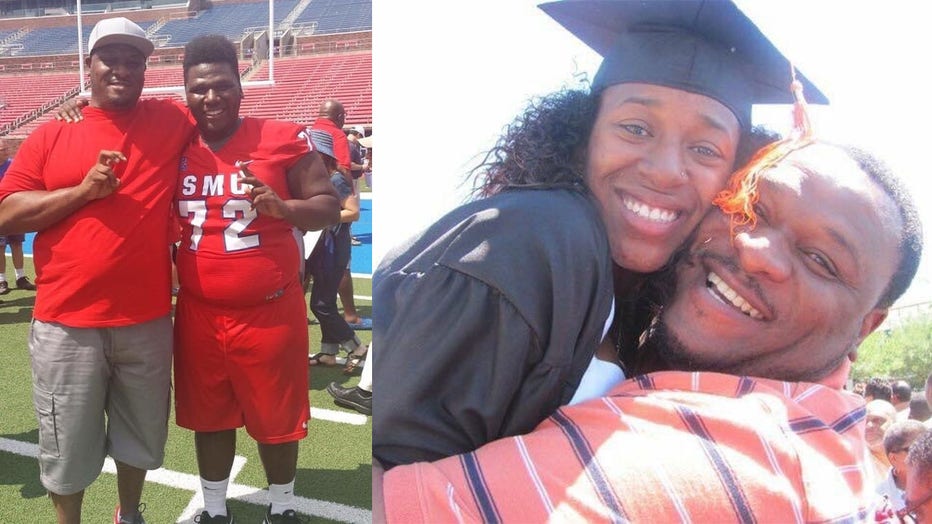 Gaylon was thrilled to be more active with his family, getting to witness his own son playing college football. It took work, but the pounds started dropping off.

"In addition to being a former transplant patient, he was just very inspiring! He took everything that I said seriously and ran with it, you know, and he's been able to be extremely successful with the weight loss," said Dr. Holder-Haynes.

In one year since his surgery, Gaylon has lost 125-pounds, reversed his painful conditions, reduced his blood pressure, and reversed sleep apnea. Now he realizes his best defense is to keep the weight off.

Dr. Holder-Haynes wants everyone to know who is considering bariatric surgery, it can be incredibly beneficial, but it requires major lifestyle changes, including a changed attitude about food and exercise.